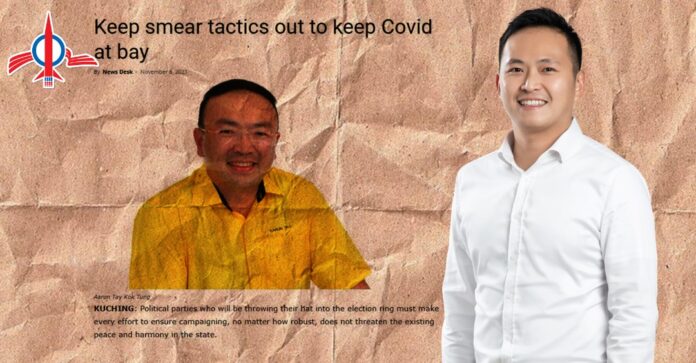 I echo the call from Aaron Tay of SUPP that there is no room for dirty politics and smear tactics. I hope that his words will reach the ears of his party members and also candidates from SUPP. In the past, we have seen SUPP’s party members resorting to such dirty politics in order to smear the name of their opponents especially leaders from DAP. On a daily basis, SUPP’s members or supporters resort to name or reputation smearing on social media platforms all in the hope of pulling DAP down.

However, the buck does not stop there. When talking about dirty politics, we should also look at the aspects such as political campaigning and election expenditure. It is a widely known secret that the GPS (formerly known as BN Sarawak) has been practising vote-fishing for many elections. As an enforcement officer, I saw it with my own eyes how a coupon system was created to get votes. Upon successfully casting their ballot papers, voters would be able to get a coupon which would, in turn, be an incentive in monetary terms.

This is the common trait of GPS, BN and PN. Even in Malacca, a video went viral when it captured food packages with RM50 being distributed to elderly people. Can we really believe that this had nothing to do with vote-fishing like what the police claimed?

Every candidate for the state election is also allowed to spend up to RM100,000 for their election campaign. With the rising cost of printing materials and etc, it will prove to be an expensive campaign especially when money has to be spent on digital platforms like Facebook. Will SUPP’s candidates also be spending within that budget of RM100,000? Judging from the past banners and billboards erected by SUPP and also their fancy LED moving vehicles, it is definite that the expenditure is higher than the allowed threshold.

Therefore, I hope that SUPP will walk the talk. Mature politics does not stop only with name-calling or smearing. I urge and challenge all SUPP candidates in the coming state elections, including Sim Kui Hian and Aaron Tay (if rumours are true that he will be standing as a candidate), to also come clean and spend within the RM100,000 budget set by the Election Commission.