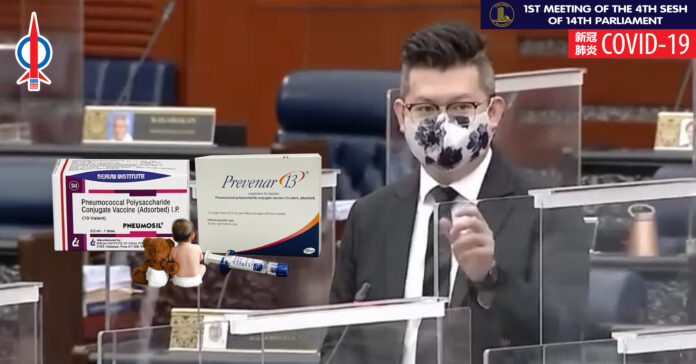 The Federal Government must consider changing our pneumococcal vaccine under the National Immunisation Programme (NIP) this year from the PCV10 pneumococcal vaccine which protects against fewer bacterial strains to the PCV13 vaccine in order to give better protection for our children against the more prevalent serotypes in our country.

This was an issue that was brought up in my budget debate so that the government changes their procurement approach when it comes to this important vaccine especially for our children.

I am concern the government will be “penny-wise pound foolish” especially since our children may be deprived of a better vaccine and that it may not achieves its target to provide adequate protection for our children from all common serotypes.

Pneumonia kills more children than any other infectious disease, claiming the lives of over 800,000 children under five every year, or around 2,200 every day. In Malaysia, the incidence of invasive pneumococcal disease (IPD) is estimated at 3.8 per 100 000 cases each year.

I am concern the government will be “penny-wise pound foolish” especially since our children may be deprived of a better vaccine and that it may not achieves its target to provide adequate protection for our children from all common serotypes.

Fact of the matter, the most common pneumococcal detected in Malaysia is serotype 6A & 19A which is not covered under PCV10. In settings where disease attributable to serotype 19A or 6C is significant, PCV13 would have additional benefit as it contains additional serotype 3, 6A and 19A. PCV13 provides the broadest coverage of IPD consistently in most countries in Asia. In Malaysia, PCV13 provided 86.1% serotype coverage of IPD serotypes in children below 5 years old in comparison to 62.9% serotype coverage for the other pneumococcal vaccine (PCV10) in Malaysia.

Based on the 2019 WHO position paper on Pneumococcal Conjugate Vaccination (PCV) , the choice of product to be used in a country should be based on programmatic characteristics, vaccine supply, vaccine price, the local and regional prevalence of vaccine serotypes and antimicrobial resistance patterns. In settings where disease attributable to serotype 19A or 6C is significant, PCV13 would have additional benefit as it contains additional serotype 3, 6A and 19A.

In a cost-effectiveness analysis for Malaysia published in 2020, it was found that the introduction of PCV13 into the NIP in Malaysia for children aged 0–2 years is expected to not only reduce the overall disease burden but also contribute to significant savings from direct medical costs and indirect costs related to productivity loss as well as higher magnitude of net cost saving for the health system.

Based on the study, the introduction of PCV13 in Malaysia National Immunisation Programme is estimated to reduce 4086 of invasive pneumococcal disease (IPD) cases, 160,833 cases of acute otitis media (AOM), 25,708 of pneumonia in comparison to PCV10 over a span of 5 years.

The 2019 WHO Position Paper on “Pneumococcal Conjugate Vaccines in Infants and Children under 5 years of age” clearly states that while PCV 10 may be cheaper initially, but if we evaluate over a 5-year period, PCV13 was estimated to save an additional RM 665 million compared to the use of PCV10. This demonstrated significant cost saving potential as well as cost effectiveness of including PCV13 instead of PCV10 into the NIP.

On top of that, PCV13 is the most widely used pneumococcal conjugate vaccine globally where currently it is introduced in NIPs in 133 countries with exclusivity in 127 countries. Several countries have switched from PCV10 to PCV13 in their NIP since 2015, including Peru, Armenia, Azerbaijan, Chile, Paraguay, Mozambique, Myanmar, Albania, Slovenia, Belgium, El Salvador and Austria

So, I believe it is important the Health Minister makes the decision to change their procurement strategy and procure the PCV13 instead. We must not be “penny-wise pound foolish” when it comes to the safety and protection of our children.

The government must also clearly explains their initial decision to purchase PCV10 which includes greater transparency in the whole deal including the differences in cost for the purchase of PCV10 in comparison to PCV13, the company that was given the tender and was it done by open tender. This is important to make sure there will not be any wastage and that we can make sure that we provide the best coverage for our people.