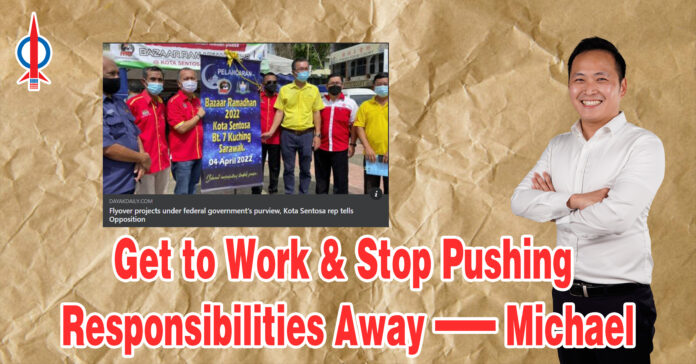 Shortly after his election to hold office as ADUN of Kota Sentosa, Wilfred Yap had asked the public to be patient with the ongoing construction works at the flyovers along 6th Mile, 7th Mile and 10th Mile. According to him, the said works will be completed by April 2022.

It seems that Wilfred Yap has during the past 3 months after his election mastered the skill of ‘taichi’. Just last month, Wilfred Yap tried to push the local drainage issues (which fall under local councils) to opposition MPs. Now again he is conveniently pushing the matter to the opposition again.

For years, the people living in greater Kuching particularly those within Kota Sentosa have consistently complained about this slow construction rate. Any road commuter passing by the said flyovers (especially the ones at 6th Mile and 7th Mile) will be able to tell that the works will not be completing in April 2022 as assured by Wilfred Yap.

As an elected assemblyman, Wilfred Yap is supposed to be the voice of the people. Therefore it is incumbent on Wilfred Yap to bring the collective concerns of the people of Kota Sentosa to the relevant authorities i.e. JKR Sarawak and Ministry of Works instead of pushing the matter to opposition MPs on the pretext that it is a federal project.

Moreover, Wilfred Yap’s party is part of the GPS coalition together with PBB. As such, Wilfred Yap should learn to reach out to his fellow GPS member, Fadillah Yusof, and seek explanations on the delay of the projects.

It is time that Wilfred Yap start taking his job properly. Stop pushing the buck around and taking the people for a ride.