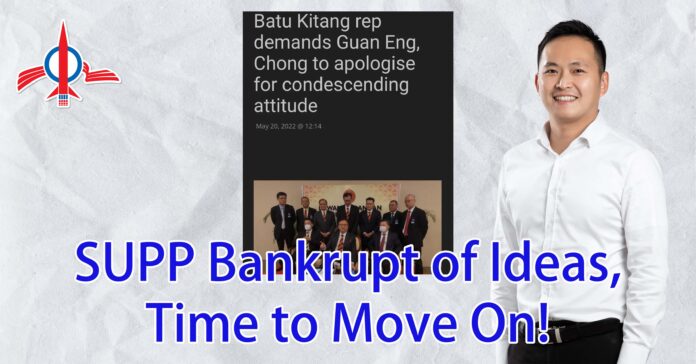 It is obvious that SUPP is bankrupt of ideas by harping on a single statement by Lim Guan Eng made close to 3 years ago. The statement was made when GPS had proposed a state budget of RM11billion for year 2020. At that point of time, Abang Jo had factored in and assumed that there will be additional revenue from Sarawak’s intended imposition of 5% tax on petroleum products.

On top of that, Abang Jo had announced numerous mega projects like the LRT. There are many more costs involved in a LRT which according to estimates would actually cost RM25.8billion to RM32.2billion for the 129km LRT lines.

Based on the simple logic that Abang Jo was counting his eggs before they hatch, of course there would have been a scenario that Sarawak’s reserves will be tapped should Sarawak fail in its attempts to impose the 5% tax.

GPS was fortunate enough that Petronas settled the case and this gave Sarawak some much needed cash injection to make sure there was money.

Even with that, Sarawak’s reserves have been depleting from RM31billion to RM24billion in a short few years. If not for the Petronas settlement and abortion of the LRT project, the state reserves would have been used to cover the costs of this extravagant project.

SUPP has shown it has misplaced priorities. They have the same modus operandi as UMNO where they are only concerned about demonising DAP, so much so that they forget everything else that they ought to take care of as government of the day. Their concern should instead be on people problems and how to solve them i.e. cost of living, basic infrastructure, health care and education.

Instead of dwelling in the past, SUPP should learn to move on and govern properly. They were elected to govern and not to run their mouths and ridicule dissenting voices or opposition parties.