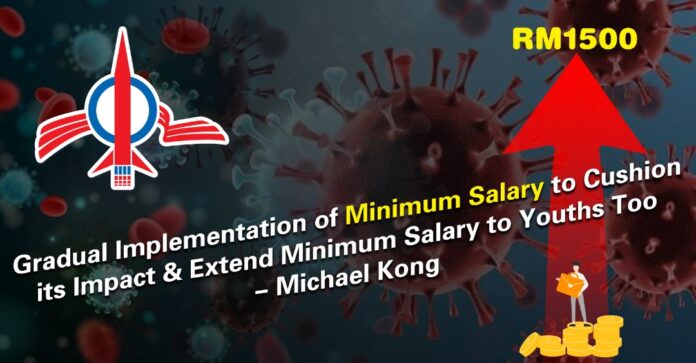 The implementation of a minimum salary of RM1,500.00 from 01.05.2022 onwards has to be properly planned and discussed with all stakeholders including but not limited to trade unions and associations. Covid-19 had been harsh on the people in Malaysia during the past 2 years. The frequent lockdowns coupled with the closure of international borders have played a role in reducing the income of most businesses. As a result, most businesses have been badly hit due to little or no help from the government.

With the current Ukraine-Russia tense situation, the price of oil is increasing every day and this would again lead to a further increase in the price of goods particularly logistics. All these increases in pricing has somewhat been passed down to the consumers. We all saw for ourselves how the price of goods like vegetables, poultry, and fruits had increased during this period.

Though it was announced that this salary increase will not be applicable to SMEs, it does not help to solve any issue but instead create room for more issues. For example, coffee shops that have less than 5 employees may not need to match the RM1,500 salary. However, there will be numerous coffee shops out there offering a minimum salary of RM1,500. With a difference of RM300 per month, many of these workers would be tempted to leave the smaller shops and this will result in many small businesses losing out due to a shortage of manpower. Faced with this possibility, these smaller coffee shops would have no choice but also opt to pay the minimum salary of RM1,500 despite it not being mandatory.

Instead of shoving this down people’s throats in 1 1/2 months’ time, there should be a proper systematic plan by the government to raise this gradually year by year; not through a sudden 25% hike. This would in hand assist to ensure that the impact of the increase is cushioned and that the trickle-down effect on the economy and inflation is lessened. Such a mechanism would also in turn help the people to cope with inflation. At the same time allow companies to properly plan and manage their organisation instead of being caught in a difficult position of retrenching staff.

We must also call upon the government when looking to raise the minimum salary to also pay attention to the predicament of many youths. We believe that the youths that receive training or mentorship i.e. pupils in chambers ought to also be adequately remunerated. The youths of today are not merely learning from their seniors but are also producing or bringing income for the firm they are working at. As such, it is only right that they are remunerated accordingly and not be taken advantage of.