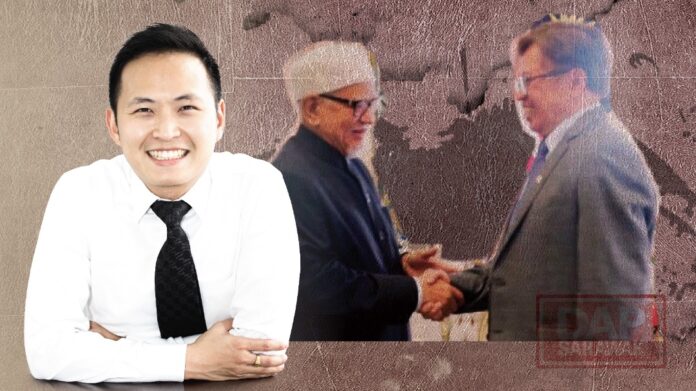 SUPP has run out of ideas to justify its collaboration with its fellow Perikatan Nasional (PN) members. Recently, SUPP Publicity and Information Secretary Adam Yii even pushed the blame on DAP for strengthening PAS to become what it is today.

Allow me to take everyone down memory lane. Many years ago, DAP did join forces with PKR and PAS to form a political coalition by the name of Pakatan Rakyat (PR). PR was formed based on a certain common understanding with the secularism of Malaysia being of them.

This was achieved during the time when Tol Guru Nik Aziz was helming PAS. Mat Sabu and the more progressive fellow PAS members were also at the helm of PAS at that time. Subsequently, Abdul Haji Awang and the more extremist group within PAS took over the leadership of PAS and diverted the goal of PAS towards the Islamisation of Malaysia, DAP was one of the most vocal parties against the idea. It was based on its core principles that DAP pulled out of PR. All this was done despite knowing such a move will weaken DAP as an opposition party. Mat Sabu together with the fellow progressive member also left PAS and formed Amanah.

However, through the dissolution of PR, DAP left PAS hanging on to its lifeline and squandering around for partners to form a coalition. PAS eventually formed Gagasan Sejahtera (GS) with many other parties where GS had a dismal showing by winning only 18 parliamentary seats during the 14th General Elections. Needless to say, DAP together with its fellow Pakatan Harapan parties received the mandate of the people to form the government at the same time.

Bear in mind that GPS and SUPP were previously extremely vocal against PAS. Many of its leaders had issued statements against PAS president, Abdul Hadi Awang, for his statements which were racially biased and were against the foundation of Sarawak. Upon being given a chance to become part of the Federal Government, GPS did not hesitate and quickly jumped at that opportunity. Now PAS is not only strengthened but empowered by GPS to become part of the Federal Government.

GPS and its fellow Perikatan Nasional component parties are attempting a meek and lame justification when they said that the decision to form PN was made to save Malaysia. Pakatan Harapan was doing fine on its own and the administration was stable until a few power-hungry bad apples within the administration schemed a way to steal the government from the people. GPS’ narrative is akin to saying a thief who first stole something yet, later on, returns it should be called a hero for returning the stolen goods. This is something any reasonable person cannot fathom and is beyond any logic.

If GPS and its component parties have any sense of dignity, it ought to own up to its poor decision and explain to the people why they were willing to steal their mandate. This act is not only cowardly but without any respect.