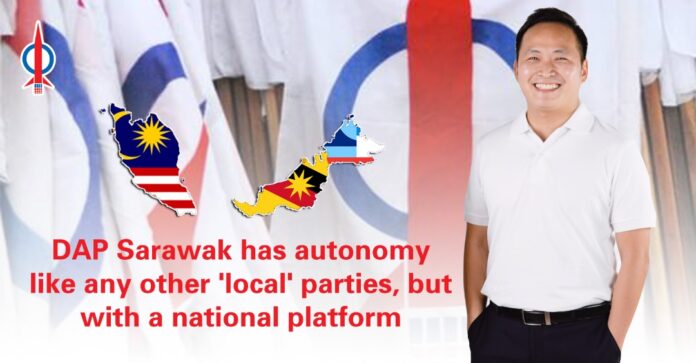 It is an open secret that SUPP cannot nominate its own candidates for any elections. Take a look at the Mambong or Dudong seat which was given to PBB’s Jerip Susil and PDP’s Tiong King Sing respectively during the recently concluded 12th Sarawak State Election. Even Dr Sim Kui Hian admitted that he was shocked at the decision and lamented that SUPP was not consulted on the matter before a decision was made.

Unlike SUPP, DAP Sarawak chooses which seats it stands in after discussion with fellow Pakatan Harapan Sarawak component members. DAP Sarawak also choose its own candidates for the seats contested and the Letter of Credentials (Watikah) are issued and signed by the Chairman of DAP Sarawak. At no time does DAP Malaysia interfere with anything in DAP Sarawak due to the understanding of Sarawak autonomy pursuant to MA63.

Therefore, it is ironic and oxymoronic for Soo Li Ching, political secretary to the Chief Minister, who is a SUPP member to point fingers and accuse DAP Sarawak of being subservient and taking instructions from DAP Malaysia.

Not only is YB Chong Chieng Jen the Chairman of the DAP Sarawak, but he is also the Vice-Chairman and heads the Disciplinary Committee of the DAP Malaysia. By holding such a high-ranking position on a national platform, it debunks the false rhetoric by Soo Li Ching that DAP Sarawak is being marginalized.

Unlike many members of parties within the GPS coalition who joined the party for money and power, DAP subscribes to the notion of building a better Malaysia through better policies. As such, that is why none of the DAP Sarawak’s MPs was so greedy for power that they would misuse the Sarawak autonomy for their own benefit and insist on being appointed as a minister.

Till this very day, DAP Sarawak is built premised on the foundations of the welfare and wellbeing of Sarawakians. This struggle for Sarawakians can be seen from the consistent service over the last four decades; through thick and thin.