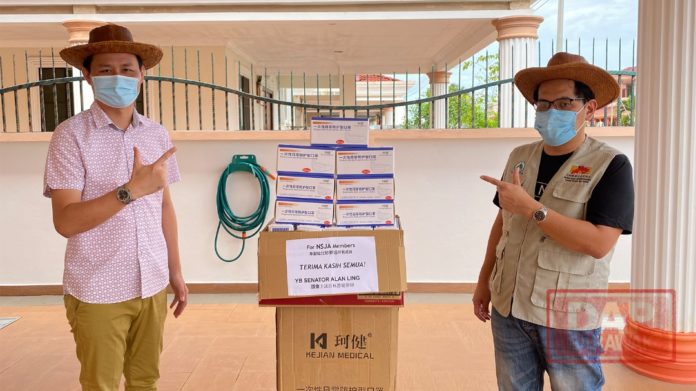 20 boxes of facemask sponsored by Senator Alan Ling as token of appreciation were handed over by himself to the president of NSJA, Andy Jong Wan Joon for distribution to the members of NSJA accordingly, especially those on active duty during the movement control order (MCO) period.

Ling acknowledged NSJA members’ effort which is very important and risky especially during the Movement Control in providing the public with accurate and factual news.

“Media members are our frontliners too, they have to sacrifice their safety to provide news during MCO, via online portals and newspapers, their job is worth to be praised and appreciated.” Ling described.

Ling hoped that the 1,000 pieces of facemasks could help the members to stay safe on their duty and advised all the media members to keep practicing high standard of personal hygiene such as do social distancing, using of hand sanitizer and to put on face mask during work.

Besides that, Ling urged people not to spread fake news and always vigilant by exercising wisdom to take steps to verify any incoming video, voice messages, text and infographic before sending out to others at a lick of fingers.

“The irresponsible act of spreading unverified news will further burden the workload of journalist especially in time like this as they will have to find out and clarify for the readers and public.”

“We have trusted media platforms in social media where we can get exact and correct news every day. Do not misuse the social applications for spreading fake news, worse still with own biased inputs during this MCO which will only cause panic in the community,” Ling said.

He once again would like to express his utmost gratitude to all members of NSJA for their dedication during this challenging time and pray for their safety in the work that they carry out.