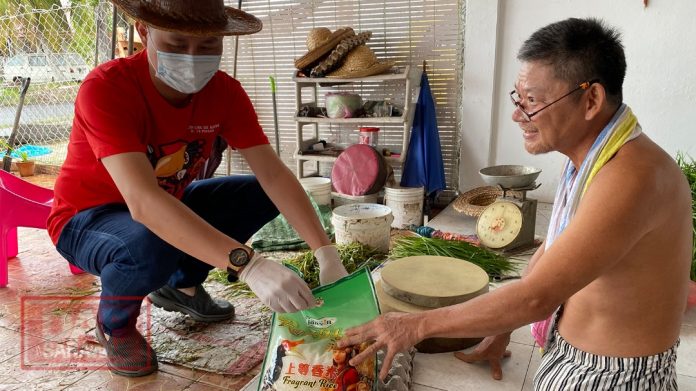 A physically handicapped man without both legs managed to sell 30kg of chives yesterday after a video showing him in the midst of sorting harvested chives went viral.

During the visit, Chin shared with Ling that the demand for his produce has declined during the current Movement Control Order (MCO) period because of restriction of movement preventing people from coming to him and many restaurants remained closed.

Ling and his team then thought that it would be ideal to film a short video of Chin so that they can share it on social media like Facebook and WhatsApp.

The chieves have matured, and he had about 100kg of them to be cleaned and sorted into 1kg pack ready for sale.

“True enough, within few minutes after I uploaded the video last night (Monday), I was contacted by vegetable dealer who expressed his interest to support Chin,” he said.

Subsequently, Ling brought the dealer to visit Chin who is staying with his wife and five children in Taman Delight, a housing estate behind Miri Airport.

“I am glad to see the response to my video is really overwhelming, with few hundreds of sharing so far and those who are keen to buy can call Chin at 0111-0833220 in advance to allow him to prepare the chives.”

Ling said he had learnt that Chin is a double amputee who lost both legs due to vascular blockage that led to virus infection about 17 years ago.

“I respect and deeply admire Chin for his positivity and hard work to raise his family.

“I salute you Mr Chin,” said Ling, who felt happiness and satisfaction in seeing his little effort to expose Chin’s plight had been able to help Chin to boost the sale of his chives which is especially crucial for him in these challenging times.

Meanwhile, Chin expressed his gratitude to Ling for his contribution of food aid and face masks and for working to promote his produce.

Thanks to Ling’s video, he said he had sold 30kg of chieves, the maximum number that he and his family members could handle considering the many hours for preparation.

“Moving forward, I may consider doing the same, using social media for marketing, which is really suitable for my condition,” he added.