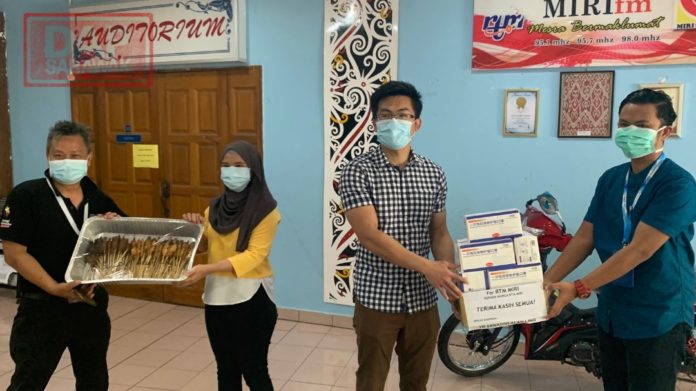 “I would like to show my gratitude and give token of appreciations to all media staffs of Jabatan Penyiaran Miri for their excellent services and high commitments especially during this MCO period. They are still giving their best to provide news to the people every day and to cover outdoor news,” Ling said.

It is even imperative at this era of technology to provide public with accurate news given the rampancy of fake news been circulated around by irresponsible quarters, the role played by national news agency like RTM is heavier and challenging.

“Following the MCO, many in the sub urban and rural are considered ‘stranded thus relying mainly on receiving news and updates from channels like radio and television, so RTM once again proven their relevancy especially in disseminating the much needed prihatin rakyat economic stimulus package that was announced recently.” He added.

Besides the donation of face masks, Ling also donated some satay to the staff on duty as a token of his appreciation.
Ling’s special assistant, Lawrence Low handed over the kind donation on behalf of Senator Alan Ling to Muhd Irfan Sanif, the engineer of RTM Miri today.

Ling hoped that the 500 pieces of face masks could help the staff to stay safe on their duty and advised all the media members to keep practicing high standard of personal hygiene such as do social distancing, using of hand sanitizer and to put on face mask during work.

Besides that, Ling urged people not to spread fake news and always vigilant by exercising wisdom to take steps to verify any incoming video, voice messages, text and infographic before sending out to others at a click of fingers.

“The irresponsible act of spreading unverified news will further burden the workload of media especially in time like this as they will have to find out and clarify for the listeners and viewers.”