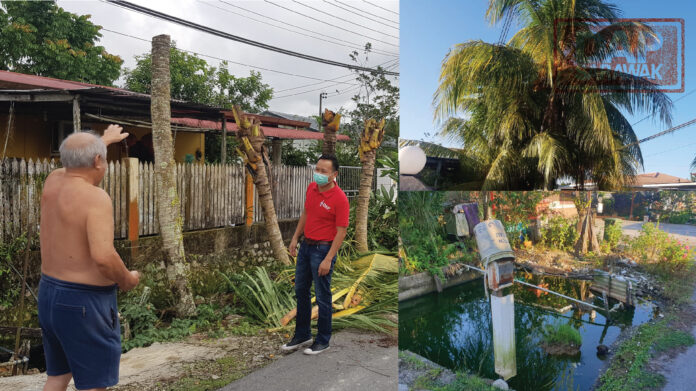 Recently while visiting Stampin Resettlement Scheme, residents from the area voiced their concerns to DAP. Too many issues plague the residents there and this has caused them to feel that the local authorities are neglecting them. The main issues would be the drains and general landscaping of the area. Many parts of the drains are blocked and cause flash floods while the landscaping is poorly maintained. At multiple locations, we see overgrown trees which reach electric cables and telephone lines.

On 25.08.2020, DAP has written to MBKS to voice these concerns especially at Lorong 10A. Here, the leaves of some coconut trees were seen crossing electrical cables. This is a potential fire hazard and with no fire hydrants nearby, the potential harm will be catastrophic. Directly across these coconut trees, we saw the creation of ponds from a drain possibly due to some form of blockage.

On the 01.09.2020, MBKS has taken steps to cut down the said coconut trees. This was well received by the neighbourhood but the remaining question is what about the other issues particularly the ponding at Lorong 10A. If left unchecked, it will create an environment for mosquitoes to breed.

On the one hand, the authorities are asking the citizens to maintain good hygiene yet, on the other hand, they do not do set an example for the people. As such, we implore MBKS to act on the issues which we have raised with urgency.