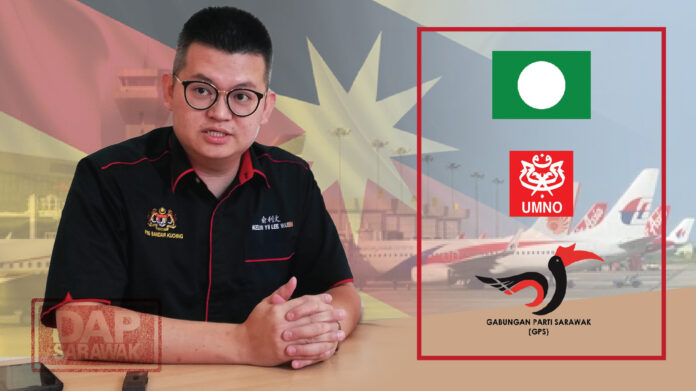 By empowering and supporting UMNO & PAS to be in the Federal Government and taking a leading role in influencing national policies that influences us all including here in Sarawak is already directly allowing the influence and extreme ideologies into Sarawak.

That is why Chief Minister Abang Jo & the GPS Government should not burry their head in the sand and think that Sarawakians live in a cocoon or“bubble” thinking what happens around us has no effect on us.

So, it is useless to say that “extreme UMNO” is not welcome in Sarawak, but yet they are working with them and supporting in the Federal Government.

That is why, the different local leaders calling for the banning of PAS leaders & bigots from entering the State have missed the point completely.

It doesn’t matter if they can or cannot enter the State, but their ideology and viewpoint is openly accessible to every including those in Sarawak through the media or even the internet.

So, don’t think the South China Sea or even Immigration Autonomy can put us in a”bubble” to protect us, but actually they are just trying to keep our heads us in the sand.

Basically, instead of having the courage to condemn the extreme words and actions of some Members of Parliament from PAS & UMNO, they try to mislead the public by building a perception that by banning them alone is enough to stop their influence on us.

This includes extreme statements by YB Pasir Puteh that is deemed to have insult the Christians and until today have shown arrogance and refuse to apologise even after complaints and response from Christians groups including those from Sarawak & Sabah.

Such statements are also a threat toward the racial and religious harmony we enjoy both in Sabah & Sarawak, and instead of condemning and protecting our rights, they are naïve to think they can shield us in our own “bubble”.

Besides that, how about Sarawakians that are affected by such divisive sentiments living in Semenanjung Malaysia? Do we not need to stand up for them too?

The biggest elephant in the room is that these local leaders are the ones that support and empower such leaders of the party to be in the Federal Government, and together with UMNO & now BERSATU, they are the biggest bloc, influencing ALL our NATIONAL POLICIES including education healthcare, economy.etc that affects us all including our children.

So rather than calling them to be ban from the State, GPS leader should instead address the elephant in the room and ask themselves why they are in the place of power in first place. They often claim to be the kingmaker, but yet they are not using their power to stand up for our rights, and also break the toxic sentiments of racial & religious politics, not just in Sarawak alone, but also the whole nation.

So that is why I urge the State leaders to not try to mislead the public and take their hands out of the sand, but really stand up for the rights of our people and condemn any statements that challenges our rights under the Federal Constitution and MA63.

If they wanted political stability, they could have backed the then Pakatan Harapan Government which had the mandate of the people, and took the deliberate choice to work with UMNO & PAS to form a back-door government and betray the mandate given by the people.