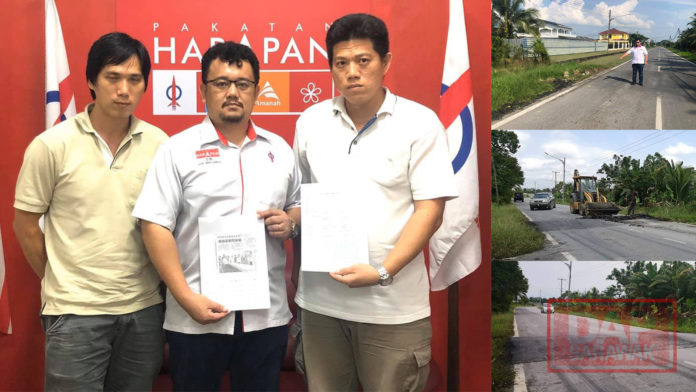 Today the children of the late Mr Tang Choon Sin who died in an accident in Jalan Pasir Panas in Sri Aman on the 5th November last week, met Leon Jimat Donald at the Pusat Komuniti Masyarakat Sri Aman.

The brothers, Mr Tang Kwang Kuok & Mr Tang Kwang Ming were seeking legal advice on the terrible tragedy which had befallen their family.

Their father was involved in a fatal accident near midnight at Jalan Pasir Panas where his motorcycle crashed at a recently built road bump. There were no warning signs or any signages to warn any passerby’s about the bump. According to many sources, there were other victims as well who had accidents at these newly constructed road bumps. They all complained of non-existent signage that should have warned them of the existence of these road bumps.

‘What is extremely baffling, after the accident occured, the next day, the road bumps were demolished, which further adds to the intrigue behind the whole construction of the road bump in the first place. My question, are the State Government agencies trying to cover up this tragedy by destroying the evidence? Why destroy it in the first place if there were proper procedures followed and done. Why do the State Agencies have to wait for a tragedy to happen, then they will realise their mistake of negligence?

It is extremely sad to note as well that now, the son, Mr Tang Kwang Kuok, an engineer by profession, is about to get married at the end of this month in Kuching and the week after, in Sri Aman.

‘We sympathise greatly with the family and I have consulted YB Chong Chieng Jen, our DAP State Chairman; with the help of my Legal Team in Sri Aman, we will be representing the bereaved family and undertake to seek justice for the family of the late Mr Tang Choon Sin.’

‘I would also like to invite any members of the public who have relatives or friends who had accidents at these road bumps, to come forward and contact me if they want to seek legal advice related to this matter, please call our office @ 083-320250 and come by to our office.’

‘We will get to the bottom of this and i would like to reassure the Sri Aman public, justice will be served,’ said Leon Jimat Donald, DAP Sarawak State Committee Member.