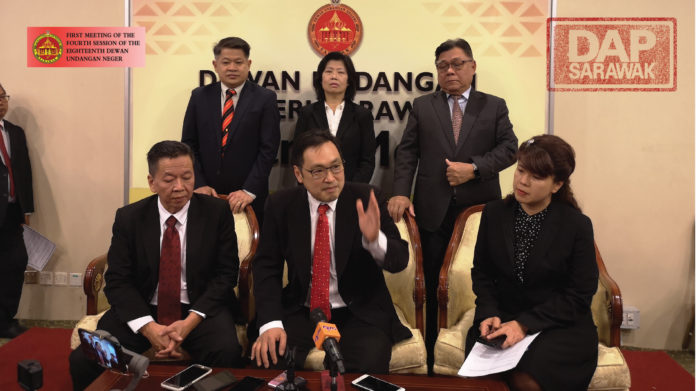 The GPS Government is heading down the path of bankrupting Sarawak within 3 years if it persists with its indiscreet and reckless spending as contained in Abang Jo’s Budget 2020 speech.

2.         RM3.742 billion to provide treated water and electricity supply throughout the State;

3.         RM400 million to spearhead the development of digital economy infrastructures;

4.         RM1.8 billion to the Government Contribution towards Approved Agencies Trust Fund for the repayment of certain off-shore loans; and

In addition, there are other items in Abang Jo’s Budget speech proposing billions of Ringgit to be allocated over the next few years, eg. RM5.145 billion for the construction of roads and bridges in Sarawak, RM797 million for agriculture programs and projects and others.

Despite such a huge amount of allocation announced by Abang Jo, the GPS Government only tabled in DUN Sarawak for a sum of RM9.694 billion for year 2020.

How will the remaining more than RM13 billion of proposed expenditure for year 2020 be financed?

Abang Jo mentioned that the Government will resort to Alternative Financing Model, which is to raise bonds and borrow from the capital market through DBoS. This is further confirmed by Douglas Uggah in his winding up today.

“ . . . . , we cannot rely on the usual method of funding the development through the annual allocation from both the State and Federal Budget of which are far from sufficient to support our development agenda especially funding of infrastructure projects in the rural areas. We ought to resort to a more robust and strategic effort in managing our funding initiatives. This calls upon the State to leverage on alternative financing model of tapping into funding provided by Development Bank of Sarawak (DBoS) as well as opportunity in the capital market that offer competitive alternative funding.”

On the one hand, the total Development Expenditure provided in the 2020 Sarawak Budget is RM6.597 billion with Operating Expenditure of RM3.2 billion, making a total approved Expenditure of RM9.7 billion.On the other hand, from Abang Jo’s budget speech, the State Government shall be spending more than RM22.5 billion in year 2020, ie. RM13 billion more than the amount approved by the Sarawak DUN.

At this rate, in no time, the State Government will incur more debt than its reserve fund and soon, if left unchecked, this will snow-balled to the amount that is beyond the State Government’s ability to repay.  This is exactly what happened to the Federal Government when it was under the previous BN administration and the GPS Government is following its footstep.