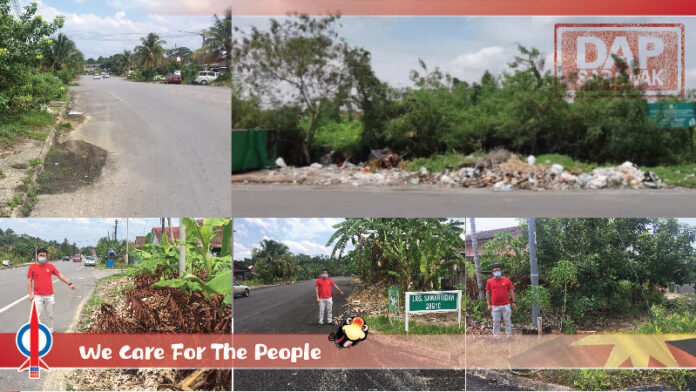 In the process of distributing flyers in the largest resident area in Samarahan (Samarindah).DAP team received complaints and suggestions from many residents, hoping DAP to aid them in attracting parliamentary authorize attention, and actively solve the issues occurring in the area, to build a beautiful and livable community.

According to Leslie Ting Xiang Zhi, to build a liveable community, the local government and Parliaments need to strengthen supervision and publicity to improve the quality, to guide masses to abandon selfish behaviors such as littering or even discarding furniture and construction waste on the sidewalk, causing weeds to grow, damaging the sanitation of the environment, as seen in the area.

He also added that the people demanded the Samarahan Assembly authorities to take action as soon as possible to clean up the rubbish accumulated in the area, to provide residents with a sidewalk that can be used for exercise with peace of mind. At the same time, the local government should clean as soon as possible, aspecially to ensure that the sewage ditch is unimpeded, so as to avoid clogging and breeding of mosquitoes.

Leslie pointed out that the local residents strongly urge the government to build a large park for the community, as a venue for sports and leisure activities, and set up various sports facilities in the park, such as a spacious square, football field and trails so as for the residents to exercise.