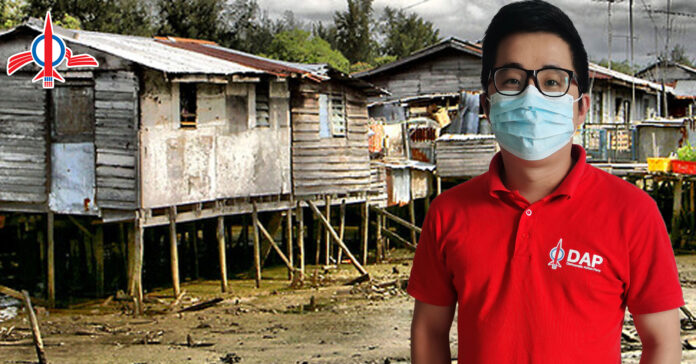 Ting Xiangzhi, DAPSY Kuching Vice Chief pointed out that for the past 58 years of GPS/BN government has failed the people of Sarawak, leading Sarawak to one of the poorest state in Malaysia, increasing the gap in economic equality.

Adenan Satem once stated that Sarawak’s basic infrastructure is more than 25 years behind the Malaysian Peninsula. To date, many kampungs do not have proper utilities infrastructure, undeveloped road structure, and poor network signal.

Additionally, Sarawak lacks foreign capital investment, and the Sarawak government is incapable of creating more employment opportunities. Many young Sarawakians are forced to leave their hometown for employment opportunities in West Malaysia and Singapore. Sarawak is sparsely populated. Its has a land mass similar to that of the Malaysian Peninsula. Yet, Due to the incompetence of the Sarawak government, not even agriculture has been properly developed. With the exception of palm oil plantation by consortiums, vast lands are being abandoned, ironically, even needing to import rice from abroad.

In terms of Sarawak’s medical facilities, it is much more backward compared to other Malaysian’s facilities. With many public hospitals in Malaysia being air conditioned, hospitals in Sarawak is only equipped with fans, far less equipped compared to fellow East Malaysian state Sabah. Moreover, many remote villages and towns in Sarawak does not have any clinics, and people are only left with empty promises by the Sarawak government that new hospitals will be built.

As seen with the handling of the Covid-19 pandemic, with hospitals at full capacity and many more left to dead, the GPS government has done nothing but gave even more empty promises, such as the RayShan hospital that was claimed by Dr Sim. To this day, nothing can be shown for.

Recently, during the pandemic, there was the ‘white-flag’ situation. This proved that people has been disappointed with the inability of the government to feed the nation. This is a country with vast territory and an abundant of resources. If there is no corruption, would people been put in such a helpless position to needed to beg for food?

Abang Jo even went as far as saying that he would set up Sarawak’s own airline when he came to power, but as usual,  nothing has happen. Now that air fares from east to West Malaysia being as expensive as it is, GPS is silent. Presently, round-trip ticket costs more than RM3,000. It is worth at least 3 month’s salary. Many Sarawakians working in West Malaysia are unable to visit their relatives because of it. Yet, the current Minister of Transport and the Sarawak government has turn a blind eye to this, which makes people feel extremely helpless.