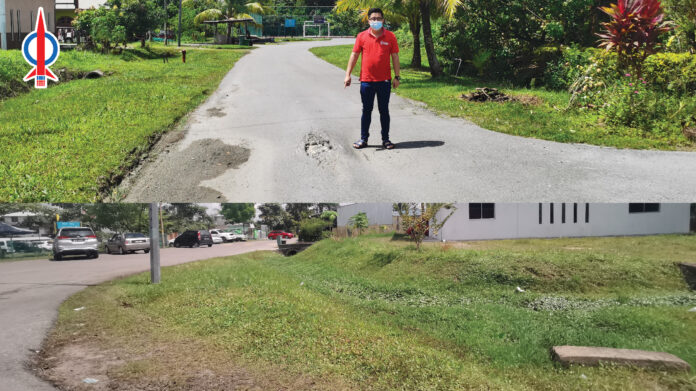 Kampung Jawa, located at 12 miles from Kuching Serian Road, has a history of more than 50 years. The Kampung infrastructure is still far behind, and the villagers are angry.

Ting Xiangzhi, a special assistant to Member of Parliament YB KelvinYii Lee Wuen, said in a report today that when he visited the Kampung Jawa area a few days ago, he received many complaints from people who were very dissatisfied with the backward infrastructure in their hometown.

According to the villagers, many areas around the Kampung have developed into modern residential areas, with commercial shops and factories. However, their kampung infrastructure development is at a standstill.

Villagers also said that Kampung Jawa has not changed much in decades, the road is as narrow as ever, the road surface is uneven. It is necessary to fill up and expand the road surface, so as not to avoid flood in the low laying road segment during heavy rain.

At the same time, the Sarawak political alliance government recently announced that it would build an international English secondary school in 12 miles, the school site is not far from Kampung Jawa and SMK Penrissen No 1, it can be predicted that there will be traffic congestion in the future, and urgency is needed to widen the road.

He said that the whole area, including the area around the Penrissen No.1, even the ditches beside the mosque were small and shallow and covered with weeds, unable to drain water, and even became a breeding ground for mosquitoes, which had a serious impact on environmental hygiene and the health of residents.

In view of this, he urged the government of Gabungan Parti Sarawak to formulate a complete set of plans to build all the mud ditches in the village into cement ditches, rather than doing a little in the east and a section in the west, which could not achieve effective sewage discharge.