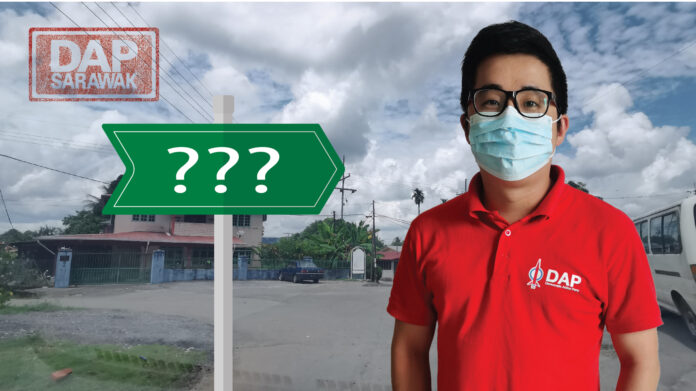 Kpg Quop has existed since the British colonial era has a population of 3 to 4,000 villagers living there. Today, despite having various roads and alleys in the Kampung, road names and road signs are still not available, causing major difficulties to the postal service and inconvenience to the people, leading villagers to question the effortless collection of assessment tax, yet leaving behind crucial infrastructure matters.

Leslie Ting issues a statement today stating that he wrote to Samarahan City Council and Padawan City Council two years ago, expressing the demands of the residents on Kampung Quop; attached satellite images of numbers and names of roads and lanes, requesting the council to arrange for the installation of street signs to meet the villagers’ request.

At that time, the Samarahan Assembly explained that most of the land in Kpg Quop was under Padawan’s jurisdiction, yet Padawan’s council insisted that the request for road signs in the village should be written by the village chief, and will not accept any letter written by DAP on behalf of the villagers. When questioned whether the council had received any written letter by the Chief, the only respond was that there was no record not was there any request for the related matter.

Leslie Ting added, 2 years had passed, yet complaints received during visitation to the village remains the same. The problem magnifies during festive seasons, where the lack of road signs handicaps the ability for the villagers to guide friends and families to their homes, often resulting in situations where they have to meet up at the nearby shop lot to safely guide them through the village. With that being said, it makes the receiving of mails an even more ambitious wish.

In view of this, Padawan’s assembly is urged actively take the initiative to install road signs for the villagers. Especially since the villagers have been waiting for 57 years and eagerly hope that the authorities can satisfy their request, and bring convenience to them.