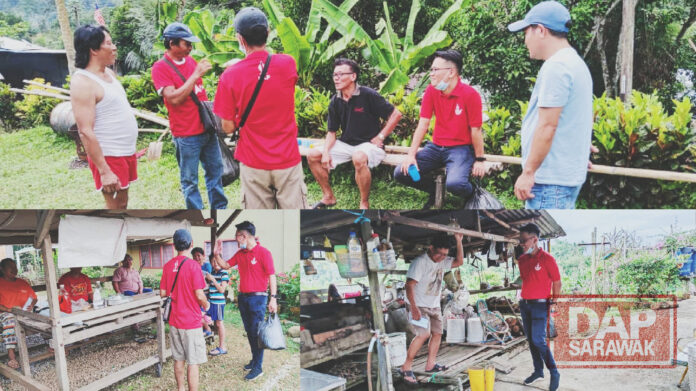 A group of DAP Serian members distributed some 600-700 pieces of face masks to few kampung in Serian to create awareness that the fight over Covid-19 is not done yet and the possibility of another wave.

The group led by its pro-tem chairman, Brolin Nicholsion who is also Special Assistant to DAP Sarawak Chairman YB Chong Chien Jen have distributed the face mask to few kampung such as Kampung Slabi, Sorak, Koran, Seroban, Rasau and many more around the areas.

Although Serian is currently a green zone, the people should not take it lightly and let our guards down. This is because Serian is a transit city where people from all over the state will pass-by Serian before they continue their next journey which Serian has the possibility get the import case.

Up to 24th of August, Sarawak has recorded 3 new positive cases which related to Alam Cluster and all three cases are in Bintulu. This make the total cases in Sarawak are 433 positive cases.

Therefore DAP Serian will continue and try its best to proceed with this effort to distributing the face masks to the people of serian especially the Kampung folks to help in preventing the spreading of the virus in Serian.