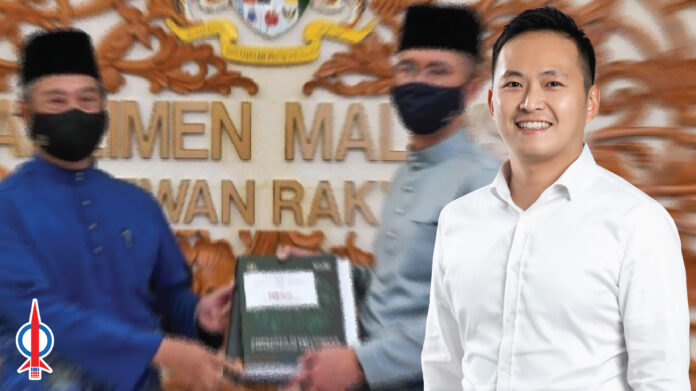 Yesterday, many eyes were glued to the screens of their gadgets and/or television sets as the Minister of Finance, Tengku Zafrul, put forward Budget 2021. This is significant because it is the first time the PN Federal Government is proposing a budget. On top of that, this is on the back of the current Covid-19 pandemic.

Since the Sheraton move, GPS has been trying to justify its action in supporting a backdoor government. The narrative of wanting political stability is not designed to provide an explanation to the public but ultimately to comfort itself for the grave mistake it had committed. After all, the political instability was initiated by GPS together with some other PN ministers.

GPS had been trying to sing praises of the current PN Federal Government by saying that the best thing for Sarawak was to continue supporting Muhyiddin Yassin as the Prime Minister together with their former BN allies. The question now is where does this old and blind loyalty put Sarawak?

Next year, Sarawak will be allocated with RM4.5 billion for development expenditure. This will include electrical, water, road, healthcare and education infrastructure. In comparison to last year’s budget under the PH regime, it is only an RM100million increase which is approximately a mere 2.27% increase. This pales in comparison with the increase of 40% when PH first took over the Federal Government in 2018!

In Budget 2019, approximately 17% of the total RM56 billion of development expenditure was allocated to Sabah (RM5.2 billion) and Sarawak (RM4.4 billion). Dr Sim Kui Hian commented that PH has failed to provide the necessary funds to Sarawak and that Sarawak had been forgotten.

However, in the proposed Budget 2021, the PN Federal Government is only allocating about 14% of RM69 billion of development expenditure to East Malaysia. This clearly shows that it is the PN + GPS government has forsaken Sarawak after they have ascended to the throne.

On top of that, PH had in previous years been providing funding to the Chinese Independent Schools (RM12 million in 2019 and RM15 million in 2020). I am disappointed (though not shocked) to see now there is zero allocation to Chinese Independent Schools. Why is Chinese education not given any importance yet RM85.5 million can be spent on a propaganda unit? Is this not a misplace of priority?

When the current PN government refuse to give any sort of funding to these schools, can we really expect them to recognise UEC in the near future? This may be the first step towards the wishes of a PN deputy minister, which is to close vernacular schools. As warned, PN is slowly bringing Malaysia back to the dark ages.

GPS can claim all they want about being Sarawak First but when it is time for them to get their hands dirty and produce results, they have repeatedly failed and disappointed Sarawak. Truly, can we rely on GPS any longer?