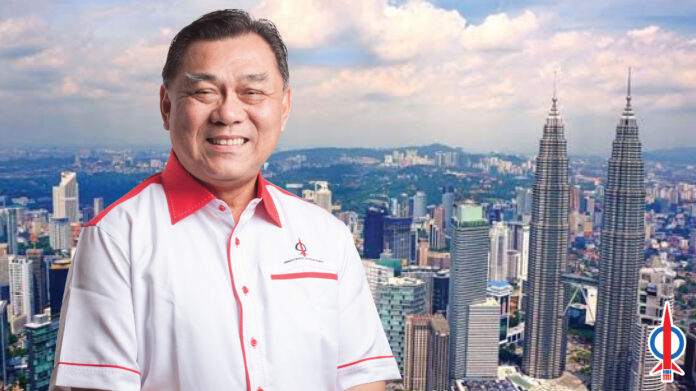 Malaysian Budget 2021 announced on 6th November had disappointed Sarawak and Sabah, it is like pushing Malaysia back to the days of the Barisan National(BN) era, said ADUN Tanjong Batu Chiew Chiu Sing.

Although the budget allocation to Sarawak in 2021 had increased by RM 100 Millions, but the increment is too little especially when it’s an allocation for the period of 1whole year.

People in Sarawak set high hopes to the ‘King Maker’ GPS in supporting the Perikatan Nasional(PN), convinced that Sarawak will be getting more favourable allocations from the Federal Government, especially an increase in the allocation for developing Sarawak.

“Otherwise, there is no point in supporting Tan Sri Muhyiddin Yassin to be the Prime Minister of the PN government “

What GPS did then was in fact strengthen the Islamization policy of PAS and the racist policy of UMNO. Sarawak will have no better day under this PN Government.

The special allocation for Sarawak under Article 112 of the Federal Constitution, which was increased to RM32 Millions in 2020, was no where to be seen either.

Furthermore, there was no allocation in the budget for Chinese Primary Schools. As for the Chinese Independent Schools the Pakatan Harapan(PH) government had made special allocation of RM12 Million in 2019 and RM15 Millions in 2020. But the allocation for this year by the PN government to them in the budget is “RM 0.00”.

While RM322.5 Billion budget of the PN Government has made history being the largest budget of Malaysia, it is a shame that Chinese Schools are treated so badly and unjustly.

When PH was the government she had set out to overcome this wrongful and unfair practice , and went for yearly fixed allocations to Chinese Primary Schools and Chinese Independent Schools so that they do not need to beg for funds from the government anymore or waiting only to be given the funds during election time .

Sadly now the PN Government is failing the Chinese Primary School and the Chinese Independent Schools with no allocations. The School Boards of Management, Teachers and Students will have to undertake fund raising again while their burdens get heavier and heavier.

It’s most regrettable that SUPP being a component member of the Gabungan Parti Sarawak(GPS) which supported the PN Government, dare not say anything about the unfair treatment to the Chinese schools by the PN government.

What is most shocking is that the PN Government like its predecessor, the BN Governmet is willing to budget RM85 Millions for its propaganda unit – the Special Affairs Department (JASA).

And what is worse still is that the PN government even allow the Employees Provident Fund(EPF) Account 1to be withdrawn for cash relief by its members!

“EPF funds are meant to be pension for members, and now the government does not even have a plan as to how to replenish the fund so withdrawn! “

I urged the GPS and the PN government to stop setting their minds on the people’s EPF,so as not to disrupt the retirement of the people.