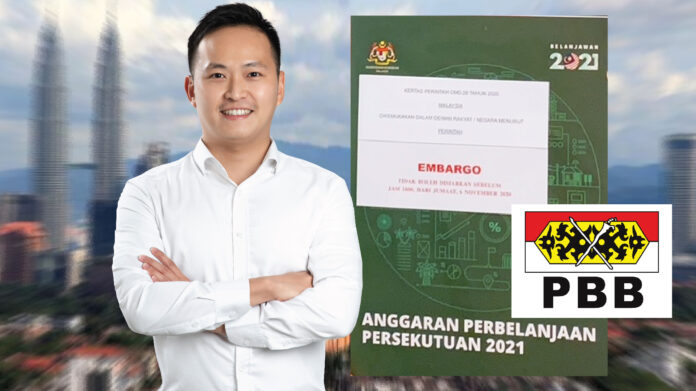 PBB seems to be the only party within the GPs coalition to be happy with Budget 2021. Abang Johari and Alexander Nanta Linggi have applauded the budget as if it is a blessing for Sarawak.

On the contrary, there is a deafening silence by the other component parties in GPS on the budget.

It is disappointing that as the Chief Minister of Sarawak, Abang Johari says that the allocation is understandable in light of the current Covid-19 climate. How can this be acceptable when instead of seeing a decrease in development expenditure, we see an increase of RM13billion in development expenditure (23.21%). Out of this, Sarawak was given a measly increment of RM100million (2.27%). Is Abang Johari accepting that more money should be spent in development of mega projects in West Malaysia instead of infrastructure work in Sarawak? In Kuala Lumpur, they are putting money for a 3rd MRT line whereas Sarawak, even the much touted ART (previously LRT) by Abang Jo has yet to even see any work done.

Dr Sim Kui Hian and James Masing should state their own individual party stance. If SUPP and PRS are truly for the people and against this budget for its poor allocation to Sarawak, I urge their Member of Parliaments to vote against Budget 2021. With the 1 Member of Parliament from SUPP and 2 Members of Parliament from PRS, the budget can be defeated by taking a collective strong stance against the current PN government for taking us for a ride. Any inaction towards this regard will show how all they say is just political theatrical.

Dr Sim famous words against DAP when the party was an opposition in Federal and State level was Jangan Tengok Saja. To Dr Sim, I now say Jangan Cakap Saja . With power comes great responsibility.