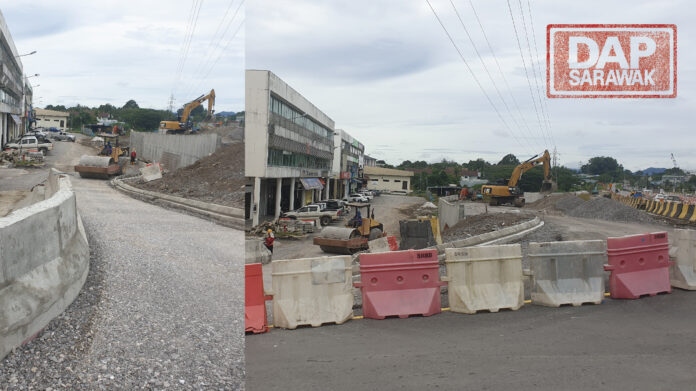 The DAP Stampin Parliamentary Team met up the contractor of the Pan Borneo Highway at the Penrissen Road stretch following the complaints from the nearby shopkeepers on the recent change of the traffic flow to the Ee Ann City at 7th Mile Bazaar, Kuching.

Of late, the contractor has closed the exit point along the Jalan Penrissen, thereby forcing all the shopkeepers, residents and their customers to exit the Ee Ann City commercial area to exit the area only via Jalan Liu Shang Bang.

This new traffic flow arrangement is counterproductive and will cause a lot of inconvenience to the shopkeepers, residents and the customers of the Ee Ann City commercial area because it will redirect all future traffic to the already highly congested Jalan Liu Shan Bang, thereby wasting more of their time in a traffic jam.

Not only will the shopkeepers and residents in Ee Ann City be affected by the new routing, but all users of Liu Shang Bang will be affected as the sealing off of the Jalan Penrissen exit point will only cause the traffic jam at Jalan Liu Shang Bang to worsen.

The shopkeepers and residents have made several complaints to the Majlis Perbandaran Padawan but their complaints have fallen onto deaf ears. Their complaint to the Jabatan Kerja Raya Sarawak also received no response.

As such, I will formally write to both the JKR and MPP to request for the authorities to accede to the people’s need and open an exit point for the Ee Ann City commercial area along Jalan Penrissen. Do not aggravate the already bad traffic congestion problem at the 7th Mile Bazaar.