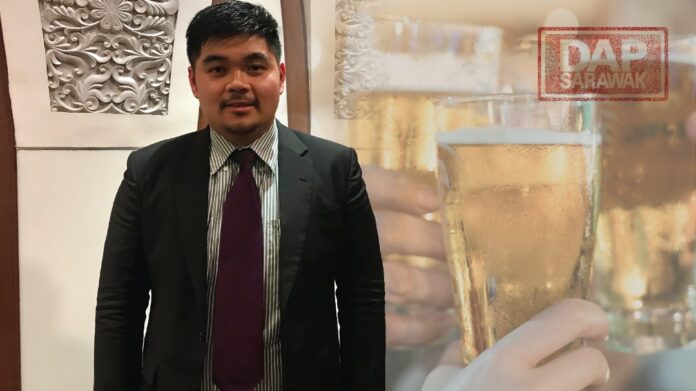 Chiew Chan Yew, Publicity Secretary of the DAP Bintulu Branch, said that the recent emergence of ban on alcohol is a ban against the country’s multi-ethnic cultural life.

Chiew pointed out that, of course, this may be the works of some religious extremists, but the real purpose is to damage and suppress the civil society of freedom of religion which must be upheld. At the same time, this is also the betraying by the GPS government of the public will of the Sarawak people and also a continuous encroachment of Sarawakian rights.

He said that if a precedent like this had been set up for a comprehensive ban on alcohol, it will definitely affect Sarawak’s diverse society, which will inevitably have a further negative effects on the harmony of Sarawak’s different religious beliefs. Therefore the ‘Back Door” GPS government should immediately come forward with a clear stand and stop the ban so as to protect the rights and interests of the natives and Sarawakians in general such that the rights and interests of natives and Sarawakians are not betrayed again.

“The ban on alcohol at a time when the Dayak people, the largest ethnic group in Sarawak is celebrating the harvest festival, is a direct challenge to their rights and interests and is a total disregard to the culture and public sentiments of the East Malaysians. This ban on alcohol is strongly supported by UMNO, PAS and their ally parties. Unfortunately the GPS government and representatives chose to remain silence and weak and dare not to voice out for the Sarawakians. “

“The GPS and its parliamentarians is obviously at a loss, when PH was the government they had often acted as “heroes” saying to defend the rights and interests of Sarawak. And now with the alcohol ban, If it is not prevented and stopped, it will just be a beginning for more encroachment on the rights of the Sarawakians by the GPS and their allied parties.

Chiew emphasized that if Malaysia wants to walk on the path of a civili society, she can refer to other developed countries on dealing with the enforcement of driving under the influence of alcohol and various preventive measures, but surely not with unreasonable and unscientific excuses as a pretext to inhibit ethnic cultural freedom. This certainly is not in line with our country’s original spirit and system of nation-building.

“Due to the harm caused by drunk driving to others, of course drunk drivers must be trialed and punished under the existing and future legal framework. This is also the legal responsibility that a drunk driver should face, but not all people who drink alcohol should be discriminated and stigmatized as such.”

Tiong King Sing Urged To Fight For More Aid To Overcome The Pandemic.

Government Urged To Ensure The Affordability Of Swab Test.