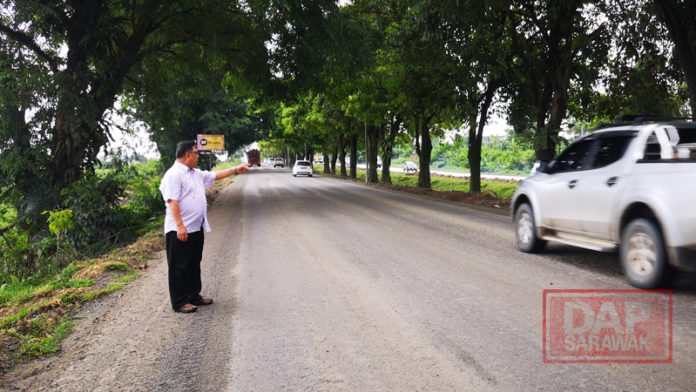 He said that he is happy this works had finally started as it should had been done much earlier as the Kidurong road from the Nyabau junction onwards must be the the most heavily used road both in terms of weight and traffic volume.

Being the only road leading to the Bintulu Deep Sea Port and so many other big and small industries the road is very important and must always maintained in tip top condition, so that it is not only user friendly but safe also.

During the last few months several Federal ministers had come to Bintulu and they can see for themselves our needs here and that is a good sign to bridging the bad. Of course our Minister of Works Mr. Baru Bian himself is all too familiar with the roads in Bintulu also. In fact his Sarawak Special assistant , YB See Chee How also came by recently and is well aware of our needs here.

“I am glad that the PH Federal government has allocated RM10 million for the upgrading of this road and also the airport road of which many stretches had waited so long for upgrading.“ Chiew said.

“The allocation is not much when we talk in terms of road construction, but none the less I am thankful to the Federal Government and I hope this a beginning to more and more funds to coming this way to develop Sarawak.”

“One of the immediate need would be to add a third lane to the existing Kidurong dual carriage highway to cater for the need here. The Public Works Department Sarawak had submitted a proposal to upgrade the Tanjung Kidurong road, I hope that it is in line with the need to construct the third lane.”