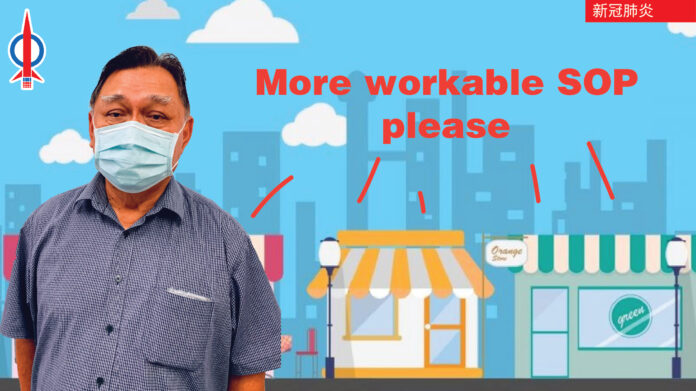 Tanjong Batu assemblyman Chiew Chiu Sing is calling on the government to talk to stakeholders, including business operators for workable and effective standard operating procedures (SOP) as the Movement Control Order is putting a lot of pressure on them.

He added that this is also vital to ensure that the MCO achieve its targets and is successful in bringing down the number of Covid-19 cases.

“Since the MCO took effect four weeks ago, the average number of Covid-19 cases in Sarawak between June 7 to 25 was still about 608 cases a day. Prior to the MCO on May 29, we have an average of 640 cases a day.

“So that is only a mere 32 cases less a day for the whole of Sarawak. It is too little considering all the SOPs we have followed, the pain, suffering and economic losses the people had endured and the sacrifice of the front liners throughout the period,” he said.

He added that without workable SOP, the extension of the MCO may also not achieve its objective and will only put more pressure on the people, especially business operators and the front liners.

“The government should at least allow shops that had closed down for MCO the past four weeks, to gradually open.

“Please set up a clear goal of what needed to be achieved, so that these business operators can know what needed to be done and participate effectively. Talk to the stakeholders, get their views and then come up with a workable SOP for all,” he suggested.

According to Chiew, with 20 business categories not allowed to operate, only 30% of the work forces allowed to work, small-time farmers unable to tend to their farm, inter district travel banned, only 50 people allowed to enter supermarket at one time and so on, these rules are a burden to all level of community.

“With all these ‘half baked’ SOPs the people have to bear as well as to put in so much effort and sacrifices by all throughout Sarawak, yet the result was only a mere 32 cases less than it was before the nation wide MCO started.

“We gain only little ground and the situation did not improve as how we hoped it would. Now, with the extended MCO, I do not see how the situation can be better since we have already done it for a month,” he said.

Chiew added that the 20 business groups that were not allowed to operate since MCO will suffer even more.

“It is long enough already for the 20 businesses that were not allowed to open. With no income, how are they are going to pay their workers’ salary, rental, water and electricity bills as well as other expenses for their businesses ? How are they going to survive?

“Why should they be the ones to shut down their businesses and is there any empirical data to justify that? We need to know all these. The government must be transparent and not keep the people in the dark,” he pointed out.

At the same time, Chiew said the authority should also be actively on the look out for potential people who might be infected with Covid-19.

“Don’t forget what the Director of Health Tan Sri Noor Hisham said last June 22, that from January to June, that there
were still 40,899 sporadic cases in Sarawak, and the origin of the cases cannot be confirmed.

“So please search the potential people who might be infected, do more tests or hold mass testing, so that we can know and prevent it from becoming a cluster,” he said.

Chiew stressed further that vaccination is important and must be actively carried out. At the same time, it is equally important to trace down those who potentially have Covid-19, so that they can be immediately stopped from spreading it.

GPS Government Urged To Use The Reserve Fund To Help Sarawakians