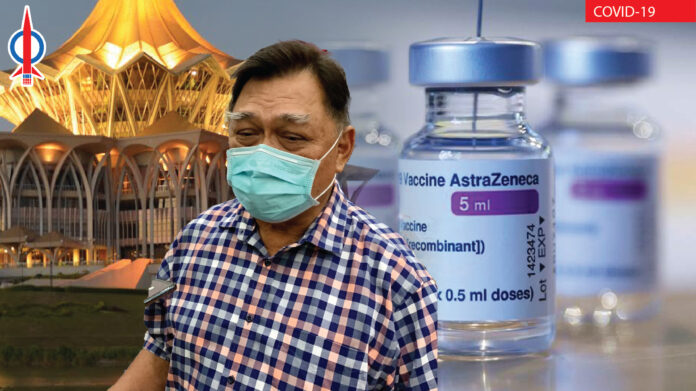 Tanjung Batu assemblyman, Chiew Chin Sing is reminding the State Government to be fair and transparent when distributing Covid-19 vaccines, in order to successfully fight the pandemic.

There is no such good news for Bintulu and Sibu. We all want to known when will other divisions in Sarawak, especially Bintulu, get its share of vaccines for this phase and how much will be given.

“All these must be said clearly as well as transparently. The people have the right to know. Only by knowing all these can the people work together in fighting Covid-19.”

We don’t want to see other people getting tens of thousands of vaccines while Bintulu is not getting a fair share,” he said adding that the distribution must be made transparently, fast and fair to ensure that all division as taken cared of fairly.

If the vaccines were not distributed fairly it would be hard for everyone to work together in fighting Covid-19 and those not getting the vaccines in time will be more worried, especially with the rising number of Covid-19 cases.

“It is regrettable that when the Chief Minister spoke about the vaccines, he only mentioned Miri and Kuching. This has made the people worried even more and becomes more anxious,” he said.

He added that if the vaccines for all of the divisions were to arrived through Kuching, why is Miri getting direct distribution with the flight ferrying it arriving in the city itself.

“Even the distribution of the AstraZeneca (AZ) was unfair. All the 30,000 doses were only distributed to Kuching and Miri while Bintulu was not included in the arrangement.”

“This may be due to the Chief Minister seeing Covid-19 cases in Bintulu as ‘not high’. That is not correct as Bintulu Divison also included Sebauh and Tatau where cases have always been high, only sometimes its low,” he pointed out.

For example said Chiew, on June 7 Bintulu has 52 cases, Sebauh had 16 and Tatau had 18, making the total 76. The division that day was ranked third for highest Covid-19 cases in the state.

“So as you can see from the figures, the number of Covid-19 cases here (Bintulu) is quite high,” he stressed.

He hoped the Chief Minister will not be misled into making unfair decision after seeing the number of Covid-19 cases in Bintulu daily.

In view of this, Chiew urged the State Government to be fair in distributing Covid-19 vaccines to all divisions and to do so without having double standard, personal agenda as well as political agenda.

Touching on the vaccination programme, he urged the responsible authority to ensure that the vaccines were administered accordingly without favour of queue-cutting.

“But the actual process that we see today is not following this arrangement. The procedures were confusing. There are people cutting queues and the government should explain to us what is actually going on,” he lamented.

In fact he said, there are some who had registered for the vaccine in February or March, but have not even received the date for their first dose.

In view of this, Chiew said it is vital for the government improve their arrangement so that the people can be vaccinated according to the initial plan.

“The State Government must be transparent on matters concerning Covid-19 and its vaccines. They should set good example if they want to win the peoples’ heart,” he said further.

GPS Government Urged To Use The Reserve Fund To Help Sarawakians