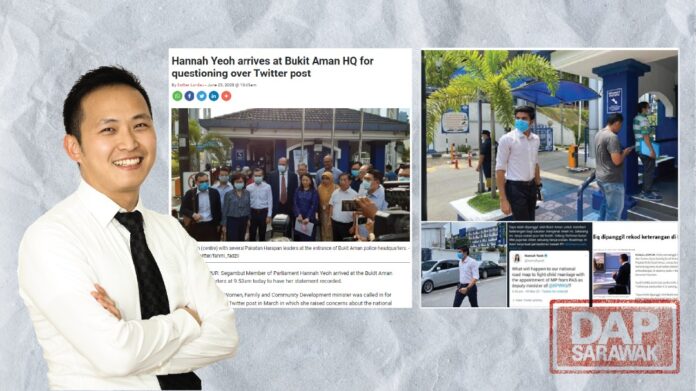 It is sad to see that after the reform agendas put forth by the Pakatan Harapan (PH) government, we have regressed to the current state that we are in. Just when we were seeing an improvement in freedom of speech and expression, we now see a stark increase in political persecution of opposition members. Under the present Perikatan Nasional (PN) government, there is a surge in the use of laws to investigate and persecute speeches critical of the PN government.

One week ago, former Minister for Youth and Sports, Syed Saddiq was quizzed by the police for an interview he gave to Al Jazeera regarding the backdoor PN government.

Similarly, former Deputy Minister for Women, Family and Community Development, Hannah Yeoh, was also brought in for questioning over a social media post where she asked what will happen to the child marriage agenda put forth by PH under the present PN government.

As the people’s representatives, both Syed Saddiq and Hannah Yeoh are expected to be able to speak up without fear of reprisal. This sort of harassment should be put to a stop. It is both frustrating and embarrassing to see such political cowardice and immaturity at this day and age.

As part of the PN government, GPS’ leaders should step up to their fellow comrades and ask them to respect our freedom of speech guaranteed under the Federal Constitution.