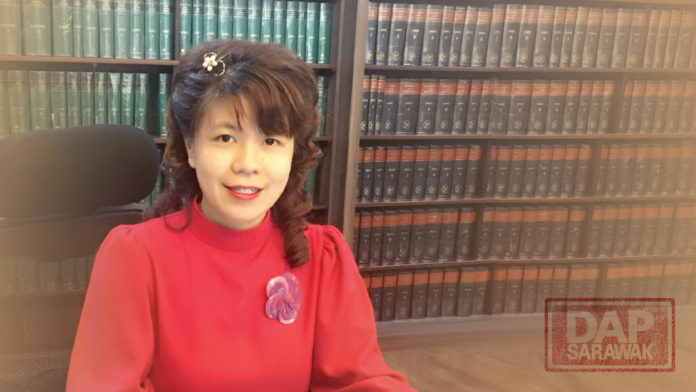 DAP Pending Assemblywoman YB Violet Yong criticized Gabungan Parti Sarawak (Previously Barisan Nasional) for not having their own stands and principles, and has always been playing the role as a puppet and yes-man, allowing UMNO and Najib to string them along.

Datuk Patinggi Abang Johari admitted this in his speech in Kuala Lumpur while officiating a Dayak and Hari Raya Aidilfitri dinner, “Being in the Barisan Nasional coalition, even though there are of certain benefits, but when we intend to execute some development, we had to be subservient to our “big brother” because we need to make decisions based on consensus.”

Yong opined that Abang Johari’s remark has proven that Sarawak in the past decades has stayed powerless and being just a “Yes-Man” within the Barisan Nasional coalition.

“Before Najib was being toppled, Sarawak’s BN and SUPP have always been a party that has UMNO and Najib’s backing, always stay loyal and even openly praised Najib for being the best prime minister. Sarawak BN felt delighted for being the ‘fixed deposit state’ of Barisan Nasional under the leadership of UMNO Najib.” she added.

She expressed her disappointment that Sarawak BN is willing to trample Sarawak’s interest and development for its own selfish political agenda just to please UMNO and Najib.

“This includes Najib’s 1MDB scandal in which not only the Sarawak BN did not dare to voice out, but SUPP also had a hand in it, having received the 1MDB fund, which brought upon utter shame to the reputation of Sarawak.”

“Abang Johari’s remark together with Batang Sadong’s MP Nancy Shukri who earlier on made a ridiculous claim that the people of Sarawak wants Najib back as prime minister clearly comes to show that the Sarawak BN has a subtle relationship with UMNO and Najib, and has allowed Sarawakians to see the true colours of Sarawak BN (currently GPS) and the way how they use politics in deceiving the people.”

Yong felt puzzled on and questioned Sarawak GPS government (previously BN) who claimed to be vocal in defending the rights and interests of Sarawak, willing to remain as silent as a church mouse and allows Najib UMNO to control their movement resulting Sarawak losing so much of her rights and being so backwards in terms of development and progress?

“Therefore, I hope that the people of Sarawak would make a wise decision in the coming state election, and allow Pakatan Harapan to take over and replace GPS as new government which is able to truly defend Sarawak’s rights and interests.” she said.

She believes only a state government that is clean, accountable and transparent in governance, could bring about more developments to Sarawak and implement more people centric policies and at the same time restoring the equal status of Sarawak.