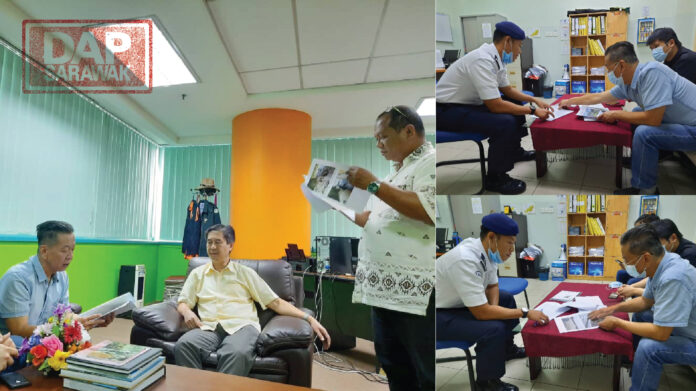 DAP Sarawak was shocked when the Sarawak DoE director, Hamzah Mohamad, described the river oil spill in the River Igan on the 23rd August 2020 as minor and said there is no cause for alarm.

The director of Sarawak Department of Environment told the Borneo Post that the spill on August 23 was from the ship berthed near Rantau Panjang and said that the company that owns the ship has been directed to clear up the oil spill.

Instead of giving a report as to the cause of the spill and the impact on the ecosystem and environment, the director simply brushed it aside as minor is totally unacceptable.

The director of the Sarawak Department of Environment should have done a more thorough study of the impact and work with all the relevant authorities such as the Lembaga Sungai Sungai and the Natural resources and Environment Board of Sarawak to investigate the cause, the effects and the cost the oil spill to the people and the state.

There were rumours that the said ship was an abandoned vessel berthed at Hwa Sen Saw Mill’s pier and the authorities concerned have to investigate whether the company who owns the vessel has breached any laws regarding the spill.

And if the law has been breached what kind of actions would be taken against the vessel’s company or the occupier of the pier, and what preventive measures to be taken to avoid such incidents to happen.

Damages had been done to the environment and the effect of the oil spill could be widespread and long lasting. There were reports that the long houses along the surrounding areas use the Igan River as their source of drinking water.

According to the people living near that area the oil spill has spread over tens of kilometres along the Igan River and they commented, “We don’t know the company cleaning up of the spill has been directed to cover the whole stretch of the Igan River or just the vicinity where the incident happened.”

Today there’s a news report by Sin Chew Daily showing a boy in the water cleaning up the sampan of his grandfather because of the oil spill showing the effect of the oil spill has reached further and affected many living along the Igan River.

Today the ADUN of Pelawan, David Wong, and his team visited the Natural Resources and Environment Board in Sibu and the Lembaga Sungai Sungai in Sibu to find out more about the oil spill incident. The head of the Natural Resources and Environment Board told us that his department knew about the incident on the same day of the oil spill through a WhatsApp sharing group and was on site that afternoon with the DoE but his board is just helping the DoE in monitoring this case.

The deputy controller of Lembaga Sungai Sungai Sibu was away on official business but his enforcement unit head told us that the company who owns the said ship just reported to the board about the incident today although the law says such an incident must be reported within 24 hours.

There are simply too many unaccounted for facts in this case and there is no way any of the state and federal government agencies can brush it aside as minor. Oil spill is serious and the effects are costly to our environment and ecosystem, we urge the authorities concerned to take this seriously and be transparent in its investigation.

We invite the Director of the Department of Environment to come to Sibu for a visit and see for himself the effect of the oil spill and the cleaning up jobs of the said company.

We urge the Sarawak Minister of Transportation, Datuk Lee Kim Shin, to act immediately as The Sarawak Rivers Ordinance, 1993, gave the Minister and his ministry the authority to act against any errant ship owner or occupier of the wharf or pier for intentional or accidental spillage.