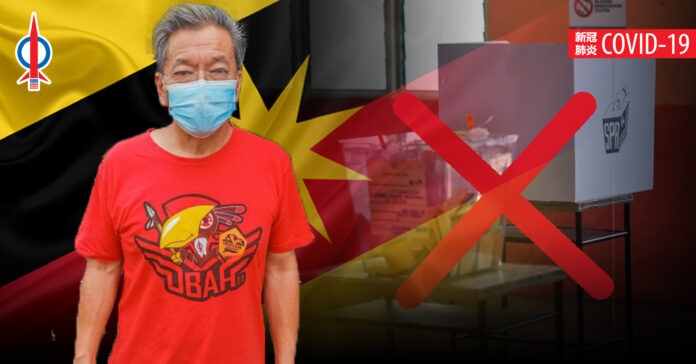 Sarawak state government should not dissolve and hold the state election in November.

As more and more sources have pointed out that the Sarawak state election will be held in November, Democratic Action Party (DAP) Sarawak deputy president David Wong Kee Woan has urged Sarawak Chief Minister to clarify the rumor and not hold the state election this year.

Wong, who is the Pelawan state assemblyman, said that there is no reason nor need for the Sarawak state government to dissolve its DUN and hold an election now.

“Although the daily number of new Covid-19 cases has decreased over the weeks, it has mainly contributed by the fact that the number of tests conducted daily has been reduced drastically. The positive rate in Sarawak as of yesterday as reported by the COVIDNOW portal is 12.0%, and the pandemic is still severe in the state.”

Wong pointed out that judging by many Covid-19 pointers, such as deaths cases, hospital admissions, ICU bed utilizations, positivity rate and others the pandemic in the state is still in no condition for a state election to be held safely.

“In the last 14 days, a total of 790 death cases have been recorded in Malaysia, 150 of which are from Sarawak. People are most worried about unvaccinated teenagers and especially elderlies, who contributed to more than three quarters of the death cases in Sarawak.”

“These groups are still in the process of getting their vaccination shots, whether first and second shot for the teenagers, or the third booster shot for the elderlies. The state government should ensure that there is plenty of time for these groups to be vaccinated. People are worried that they might bring the virus back to their homes and infect their family members, especially the unvaccinated groups.”

Wong said the state government should listen to the voices of the people and the sentiment of the general public, people are trying hard to recover from the pandemic and are generally against the idea of a state election now.

“Sarawak Budget 2022 has already been approved and the government can proceed to implement the plans as in the Budget 2022. The government should be focusing on getting people back on their feet and to help to recover the state’s economy.”

“If the state government is of the opinion that the pandemic in the state can be controlled in the following months, why the rush of dissolving DUN and holding election this year instead of waiting for February 2022, where the emergency order (EO) for Sarawak is expected to be lifted? Or is there any hidden agenda behind the rush for the state election to be held such as Undi18 and other reasons?”

Wong added that instead of rushing for a state election, the Sarawak state government should long have taken this opportunity to discuss with the Election Commission of Malaysia on how to implement postal voting for all the Sarawakian currently staying outside the state, instead of only being allowed for a few groups.

“The state government should not require our fellow Sarawakians to come back in crowds, especially in light of the pandemic. If the state government is sincere in protecting Sarawakians’ rights, it should have pushed for the much-needed reforms, instead of undermining the rights of the people for decades.”, he said.