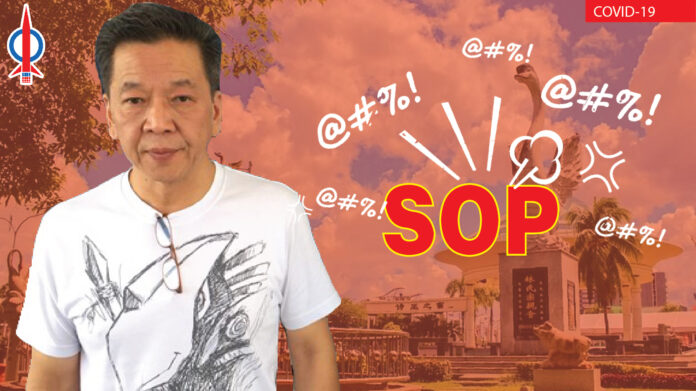 Sarawak state government must not neglect small business owners who are not allowed to operate during CMCO and review their SOP to minimize confusion, said deputy chairman of DAP Sarawak, David Wong Kee Woan.

“The current SOP in Sibu is a total mess where even the police as the enforcement unit can be uninformed. Recent case of farmers from Sungai Bidut not being allowed to pass Igan bridge to distribute their produce before 6am is just one of the many examples.”

“Now, people are confused about businesses that are allowed to operate and worried about being slapped with heavy fines. State government frequently changing the SOP and allowed list has only worsened the matter.”

Talked to many business owners, including electric appliances shops, tailors, barbers and more, Wong said these business owners are complaining that they are always the first ones to be ordered not to operate whenever a new control order is imposed.

“They complained that why are their businesses always the first to be closed when the nature of their businesses does not cause crowd gathering unlike markets or eateries. Their concerns are understandable as their income has been severely impacted since the implementation of CMCO in the state. ”

“Whether it is MCO, CMCO or RMCO, the objective of any movement control order is to prevent crowd gathering to prevent the spread of the disease. And if the state government does not provide financial aid to these business owners, it should allow businesses to operate, provided that strict SOP is followed and there will be no crowd gathering.”

“On the other hand, if the state government is of opinion that businesses must be closed in order to control the epidemic, sufficient financial aids must be provided to them, as these people still need to bear their expenses such as employee wages, rents etc.”

He said, CMCO has been implemented in Sarawak for months, where only essential services are allowed to operate, yet the epidemic has not seen much improvement, which calls for the government to review its policies to better control the epidemic while minimizing the impact on people’s livelihood.

“CMCO has taken effect for months in Sarawak, yet bears little fruit and we have repeatedly called for a total lockdown to break the Covid-19 transmission chain, provided that the state government must provide financial aids to people and businesses. “

”The state government has no choice but to allow certain businesses to operate, worrying that the state economy will be impacted. But the fact is, the economy has already been severely impacted and there is no way for the economy to recover before the epidemic is controlled. Hence the state government must prioritize flattening the disease curve by providing financial aids and imposing total lockdown, or else the current dire situation will only be bound to continue before vaccinations are done for the crowd. ”

The CMCO in Sarawak has been extended to May 17, and Wong, who is also the state assemblyman of Pelawan, said small business owners are worried that further extensions of the CMCO will be even more taxing to them.

“We appreciate the contribution and sacrifices made by civil servants, especially frontliners, and we support the state government’s decision to provide special assistance aid to them. But I urge the state government to also provide financial aids to the people and business owners that chose to stay home during the pandemic as they too, are making sacrifices to combat the pandemic.”

“The state government must ensure that people and businesses can survive before the epidemic is brought under control, by providing sufficient aid. ”