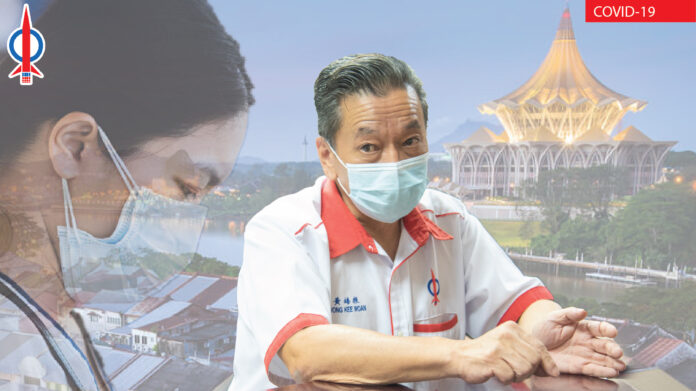 Sarawak state government has to provide more financial aid to the public if it wishes to control the pandemic in the state, said Sarawak DAP vice-chairman, David Wong Kee Woan.

“Ever since the outburst of the Pasai Siong cluster in January, many, including frontliners and experts have raised their concerns about a need to enforce a comprehensive movement control, provided that the government has to provide the public with sufficient and necessary aids. Yet the government has chosen to loosen the control and the pandemic has only worsened since. ”

“Government must stop their “fire-fighting” mentality at once and listen to people’s voices and concerns. The recent reopening and closure of schools is just an example of how the government has ignored the concerns of many parents, teachers and experts.”

More than 10 schools in Sibu have reported infections since the schools have reopened from April 5, and the state government has ordered all schools in red zone areas in Sarawak to be closed for 14 days only from April 20.

Wong said the current enhanced SOP will take effect for only 5 days, subject to extension by SDDMC if the need arises, and one of the main reasons for such a short period of enhancement is that the state government is worried about the impact of the SOP to the livelihood of the people and economy of the state.

“However, the fact is that people are already heavily impacted long ago. And if the state government wishes to flatten the disease curve, it must provide enough assistance to the people in order to fight the epidemic together.”

Wong, who is also the state assemblyman of Pelawan said that the largest obstacle in Sarawak’s fight against the epidemic is that the government is not working together with the people.

“The state government has not provided sufficient financial aid to the people nor intends to impose a total lockdown, worried about the economy of the state. As of now, 15 sectors are allowed to operate while others are not allowed to operate at all. However, people are complaining that they received different feedback from different groups such as police, local council, or disaster management committee, and some are even fined due to misinformation.”

“People still need to bear their living expenses, and business owners to pay wages and rents as usual. Not receiving aids from the government, some have to take the risk to continue to operate, even if they are not allowed to do so, to put food on the table. The government has to be compassionate and provide these people with sufficient aids, instead of ruthlessly issuing fines to the people. If the government wishes to tighten its movement control, financial aid has to be provided to ensure that people can stay home not worrying about their livelihoods.”

He said if the state government wishes to successfully flatten the disease curve, it is necessary to strengthen movement control, but while doing so, the government must provide sufficient assistance to the people, so that the people and the government are together in fighting the epidemic.

“I once again call on the Sarawak government to show its determination to fight the epidemic, we should make good use of our state reserves, provide necessary assistance to the people and carry out a comprehensive control, being indecisive will certainly worsen the epidemic in the state.”

Wong urged the state government to hold its state legislative assembly so that they can discuss and look into how to provide aid to the people, including the provision of financial aid to the people through a supplementary bill and others.