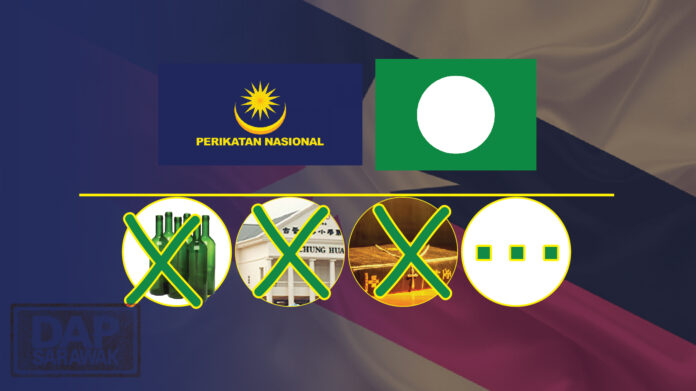 When Perikatan Nasional government took over the Federal Government with the participation of UMNO and PAS, the writing was always on the walls that PAS and its extremist views will find a way into our lives eventually.

The early signs were telling with the initial stop towards issuance of alcohol licence. It was followed up by Jawi Friday and subsequently the statement by PAS’ Pasir Puteh MP, Nik Muhammad Zawawi Salleh that the Bible had been distorted and/or altered. Till today, PAS has arrogantly refused to apologise for any such remarks.

It is sad that the glimmer of hope of rejecting racially-based parties in Sabah will be extinguished. BN Secretary-General, Annuar Musa has announced that a PAS representative will be appointed either to the state assembly or the Sabah cabinet.

Our warnings on the possibility of PAS finding its way in our lives were loud but it fell on deaf ears. UMNO and PAS partnering GPS, we do not know whether GPS will be able to stop UMNO and PAS from infiltrating our local politics. However, if Sabah shall serve as a lesson, then we may soon see UMNO and PAS representatives being appointed to hold important posts in Sarawak including but not limited to councillor or even mayoral posts. Such a move will have a profound impact on all Sarawakians and its effects will be irreversible.