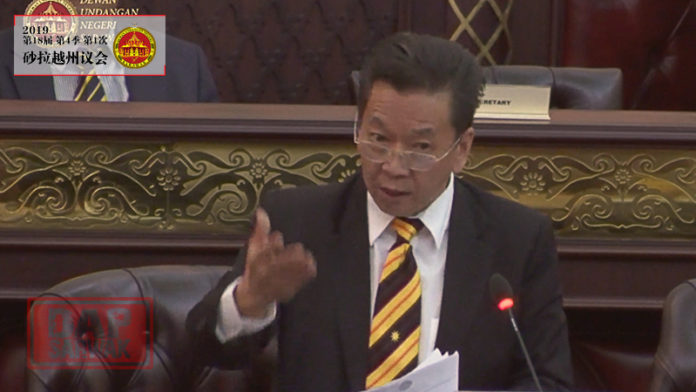 Tuan Speaker, I rise to debate on the Motion in appreciation to the speech delivered by his Excellency Tuan Yang Terutama (TYT) in this august House on the 29th day of April 2019.

Tuan Speaker, after 2 days of debate on the motion of thanks, we can conclude the following:

2.They have nothing New apart from the following:

b) They blame the slow economic on the PH government and forgot that PH just took over and are busy cleaning up the mess created by the BN and are paying debt incurred under the BN such as have the finance minister has to put aside 37 billion in the 2019 Budget just to refund the GST and Income tax refund owed to the people by their Bossku Najib. Sarawak economic is not an island but subject to the volatility of the global economy such as the oil prices, palm oil and other commodities’ price and our currency is tied to the performance of our debt equity ratio and the reputation of the federal government and Malaysia has to suffer due to the kleptocracy regime of Najib.

3.They shouted Sarawak First as if by shouting that slogan they are on the moral high ground and become the true defender of Sarawak rights. If they are for Sarawak First, why didn’t they accept the offer from PH Sarawak in the run-up to the GE14 to accept the responsibility for the Education and Healthcare of Sarawak in return for the 20% oil royalty and 50% tax revenue generated in Sarawak. Tuan Speaker, they speak about devolution of power and what else is more important than Education and Healthcare? They just want the Money without responsibility and forgot that the Day of the BN is over and there is no more Free-spending days like before.

4.Tuan Speaker, while PBB members were shouting “bully and U turn policies of PH, they forgot that PH government listens to the people and adjusted our policies that are not welcome by the voters unlike their BN’s master, UMNO, who will bulldoze through no matter what. They also forgot that if indeed Sarawak has been bullied by our federal government it was with their consent such as the PDA Act 1974, the downgrade of our position as one of the thirteen states 1976, the Territorial Sea Act 2012 and the National Security Council Act. Without the then BN and now GPS, we will not be subjected to all these encroachment of Sarawak rights.

5.Tuan Speaker, the SUPP law makers are playing the game of deceit. Member for Batu Kitang and Piasau both talked about “Referendum” in their debate and I have these few questions to ask them:

a) Why did they vote against a motion on Citizens Initiated Referendum Bill 2017 by member of Batu Lintang on 14 May 2017? Tuan speaker, to refresh your memory, when the vote was taken on that day, the Distinguished Datuk Professor Dr. Sim, member for Batu Kawa and minister for loacla government and Housing “ran away” and was no way insight in this Dewan, what a show that was.

b) If SUPP really want a referendum, why didn’t their member in the state cabinet initiate a Ministerial Motion to do so?

C) Even if their minister didn’t want to table a ministerial motion, then member for Batu Kitang and Piasau can still table a private member motion, why didn’t them? Hypocrite! They thought Sarawakians are stupid and tried to paint a picture that SUPP want to give people the Referendum which in fact they just didn’t have the guts to carry through.

GPS must be fair to all Sarawakians

Tuan Speaker, the GPS government is a government of hypocrite who contradict themselves. The CM has promised to be a CM for all Sarawakian when he took over the chief minister ship but he has failed his own promise, our member from Pending rightly put it that the CM has promised that the PH member of this House will be given grants last year and it was reported in all the news. But until today “satu sen pun nadai” for the pH member of this house.

The GPS member of this house was each given 2 million in MRP, 5 million in RTP and 1 million in House improvement grants by the state government and yet PH member was not given a single cent, where is fairness and justice?

Tuan Speaker, when the GPS want the PH to support their motion then they say, “we are all Sarawakians…” but when they don’t need our support then they treated us like enemies and forgot that we were here because the people in our constituencies voted us to be here. To punish PH members of this Hosue is akin to punishing the voters in our kawasan, can the CM tell us whether all these voters are Sarawakian or not? It is another example of Hot Air by our GPS government.

Tuan Speaker, the GPS government cries like baby saying that the federal government has not been fair to them and brought up schools, healthcare, grabts and development funding. But why don’t they ask themselves whether they have been fair to all Sarawakians? How about showing the federal government Fair play by leading the way with grants to PH elected members of this house? With the ongoing negotiation on MA63, more power will be devolved to Sarawak such as tax revenues and devolution of power, how could GPS be trusted to safeguard Sarawak interests if they can’t treat all Sarawakian as Sarawakian?

Tuan Speaker, my comrade and colleague, member for Bukit Assek rightfully put it in her debate that we need a master development blueprint for Sibu.

Tuan Speaker, Sibu has been better days during the boom days of the timber industry and we have one of the highest number of students with higher education among all the towns in Malaysia.

But then it was ignored over the past decades and now it really becomes a town that has been neglected by the state government. The infrastructures of Sibu is in such a sorry state that I am lost for words to describe them.

To date there is no flyover in Sibu, the drains in the centre of the town are the same as 40 years ago, the roads are bumpy and those travelling in the cars are like riding the waves on the river.

Tuan Speaker, I have to highlight the needs for upgrading Jalan Ulu Sg. Merah, Jalan Oya, Jalan Igan on several occasions in this house. I urge the state government to immediately set up a team comprising the officials of ministry of transportation, the local councils, the district office to look into the upgrading of these roads immediately.

Tuan Speaker, the development in Sibu was brought about by the private sectors instead of the public sector. Jalan Ulu Sg. Merah for example has been the construction of more than 1000 houses and has two schools along it with thousands of student and yet it still remains the same single lane road that was constructed more than 20 years ago. Can you imagine the jam along the road during the morning and evening rush hours, if a car broke down then it will create a KM of traffic jam.

I have in 2015 submitted a 70 million Sibu outer-links proposal to our late CM Tok Nan and I have follow up on he said proposal tirelessly because I know Sibu deserves better and the government has the responsibility to bring about infrastructure developments. “For more than 15 years , there has been no new road been constructed in Sibu. There are massive traffic jams during rush hour – morning, noon and evening,

The proposal was to build three new roads and upgrade an existing road in Sibu for about RM70 million.

“One of them is at the Jalan Wong King Huo roundabout, connecting to JPJ, which is about 4.5km. There will be a bypass in the middle. We estimate it cost about RM30 million. Another one is connecting a residential area to another by constructing a bridge across Sungai Merah. That would cost around RM10 million.

Another one is Teku Road to Sibu Golf Club area. A lot of those in Kampung Dato and Kampung Nangka will be relocated to this golf club area, so that road would be around 7km, costing some RM20 million.

One of the oldest roads in Sibu – Jalan Oya – needed upgrading, too. The stretch from SMK St. Elizabeth to the traffic junction that would cost about RM10 million.

Tuan Speaker, with a budget of 11.9 billion for 2019, there is no reason why the CM cannot allocate 70 million to Sibu.

On the other hand, the GPS want to use the Federal Agencies for their political gain by demanding access to schools, hospitals, police department and even demand RTM to carry their news.

How true was the above accusation? In my observations, I believe the above description is Fair Comment.

While GP complained that Sarawak has been exploited by the federal government in term of oil and gas, how about the timber industry? How about the land, both NCR and state land?

We have seen the Big 6 dominated the land ownership with tens of thousands of hectares and natural resources such as timber. Over the past 40 years, the elites in Sarawak have total control over the distribution of the wealth of the state while the average Sarawakian can’t even own a house with 4 points of land.

We have seen NCR and state land being given to the oil palm giants instead of small farmers and while the giant corporations enjoy the windfall we were left with an environment destroyed by them. The latest incident near Mulu Cave is another example of the exploitation of the people by our Sarawak elites backed by the GPS.

Tuan Speaker, it worried me when the assistant minister for natural resources told this House in his reply to member of Batu Lintang that we have 4 million hectares (32 % of our land mass) for agriculture development and three million hectares have been assigned to the planting of oil palm. Tuan Speaker, we all know oil palm plantation is bad for our environment and while we want to develop our land for revenue we must be aware that the oil palm plantations are concentrate in the hand of a few elite groups which do not employ local people and over dependency on this sector is not wise and benefit only a small percentage of the population. Enough I enough

If there was mismanagement in Sarawak, we would not be in such a state of backwardness where many are still without electricity and piped water supply.

Tuan Speaker, whether we like it or not, slogan shouting like “Sarawak first” or blaming game on PH government just aren’t the solution which we need to bring Sarawak forward. We need to work together with the federal government to bring back what were ours as per MA63. We also need a clean, transparent and responsible state government to bring Sarawak forward and GPS is simply not the one we can trust or count on. Their 40 years’ partnership with BN before 2018 has brought about the loss of Sarawak rights and wealth and their mismanagement has caused huge incomes disparity to the people of Sarawak.

Their track records show that instead of being the protectors of state rights, they were actually the perpetrator that sold our rights since they became part of BN in the early 70s.

The latest been the amendment of Article 1(2) which they once again went again the wishes and interests of Sarawakian by stopping the pH government to return our status as agreed by our forefathers during the formation of Malaysia in 1963.