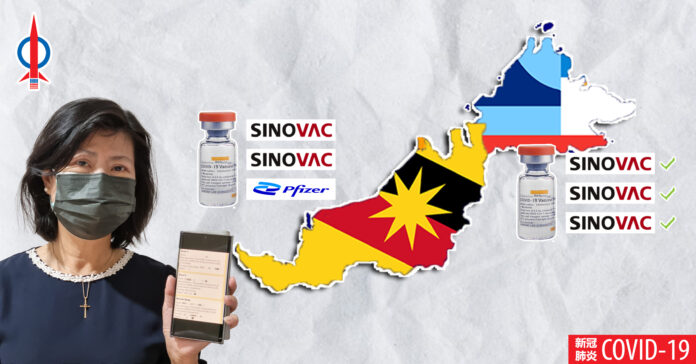 Why is the Sinovac booster already available in Sabah when it is still not available in Sarawak? In late October, it was already announced in the press (New Straits Time- 27 th October 2021), that the people in Sabah have the choice of Pfizer and Sinovac as their booster shot. I received this confirmation also when I sighted a digital certificate of a Sabahan which showed both 1st and 2 nd doses and booster dose as Sinovac vaccine.

Given that Sarawak has 77.7 per cent of her population who were inoculated with Sinovac vaccine for their 1st and 2 nd doses and that the majority of the people are still reluctant and very concerned about the mix and match policy, the state government should have made sure that the Sinovac booster is made available to these people as soon as possible.

The government has to realise that no matter how much data is presented to show that the mix and match policy is safe, there are people who cannot be convinced by these data. And there are also people who are concerned about the long-term effects which no data can be available at this moment.

As it is, the statistic for those who have received booster shot is still low, with the majority of the elderly people rejecting the appointment scheduled in their MySejahtera. And with the state election to be called within the next few weeks, it is irresponsible not to make sure that the Sinovac booster as well as all other approved boosters, are made available to the people first before they exercise their right to vote.

I also call upon SDMC to provide an alternative arrangement for the unvaccinated persons to enter government premises, especially UTC to perform tasks or access to certain services. Certain time or days can be set aside for them so that they can enter these premises for such purpose.

While it can be understood that the majority of people feel more secure knowing that all those who enter the premises are also vaccinated, it is not right to continue punishing those people who, for one reason or the other, cannot or refused to be vaccinated. This is especially when there is no legislation in the country which requires mandatory vaccination.

It has been 3 months since the “no vaccination no entry” policy was imposed by the government premises like UTC. And since then, it has also achieved its purpose of achieving 90% vaccination of the state population age 18 and above.

It is therefore time for the government premises especially UTC to relax their policy by allowing access to everyone irrespective of their vaccination status, albeit with strict and stringent SOPs in place.