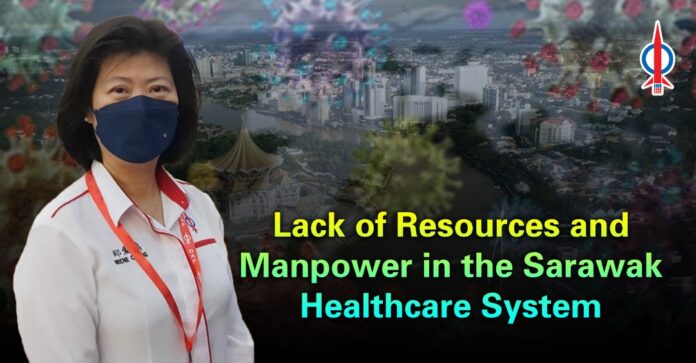 It is despicable that the recent pandemic of which, Sarawak has been one of the worst affected, has failed to prompt the federal government to satisfactorily resolve the problems of the lack of resources and manpower in our healthcare system.

It is also totally unacceptable that on the issue of resources, we are not only lacking in the supply of the necessary equipment but has also been shackled with 76% of the medical equipment which is beyond economic repair (Dayak Daily, 24th March 2022).

This is in contrast with 19.6% of the Ministry of Health’s overall assets as of 31st December 2020 in the whole Malaysia (New Straits Time 28th September 2021).

The question which looms from this revelation is – are the health services which were delivered to the Sarawakians all these years, been in anyway compromised?

The poor state and lack of the medical equipment in Sarawak has existed since many years back. It is sad that despite the life-threatening Covid-19 pandemic, the dismal situation has continued without any real effort to resolve the issue. This is not for the lack of awareness being raised. Indeed, many statements on the lack of resources and manpower in our hospitals have been made from many quarters, including my statement made in December 2020 on the failure to equip even one PET SCAN in any one of hospitals in the state. All these statements have fallen on deaf ears.

It is therefore imperative that this matter should no longer be allowed to stay locked in the Pandora’s box. Sarawakians have enough of being constantly slapped on the face as like the instance when during the height of the pandemic in Sarawak, our hospitals were “gifted” with 10 units of ventilators, 8 of which were not in working and functioning order. Even if they were still in working order, it was also a fact that the equipment delivered were of models with no built-in air compressor and which dated to as far back as to 2004. And despite calls from several quarters, up until today, no one had been held accountable for the blunder.

I further refer to the statement that Sibu Hospital has been neglected for the past 10-15 years (Borneo Post 26th March 2022). In fact, the matter has been there for more than this time span and had been constantly raised by us in the opposition. Even during the 22 months when we were in the federal government but not in the state government, it had been one of our top priorities to resolve the challenges faced by our hospitals. The proposed solution was to decentralise the healthcare system and to allow the state health department the autonomy to address and resolve the lack of resources and manpower faced by the hospitals in the state.

And as early as in December 2019, the Pakatan Harapan government had agreed in principle to decentralise some federal health matters to Sarawak even though the details were yet to be finalised (CodeBlue 17th December 2019).

And in Sibu, David Wong and I had put into action, the plan to open the Cardiac unit in Sibu Hospital for the people from Central Region of Sarawak. We had even gone so far as to recruit an architect and an engineer to draw for free, the plan for the unit and which plan was eventually submitted to the Ministry of Health. We were in the middle of discussion with the then Minister of Finance (Lim Guan Eng) for the financial allocation for the project when the plans fell apart due to the fall of the Pakatan Harapan federal government and to which the GPS government had aided in.

It was therefore very sad and tragic that Sarawakians would continue to be deprived of quality healthcare service just because politics got in the way. The lives of people would continue to be compromised for as long as political interest is placed above the people’s interest.

GPS government should therefore, for the sake of all Sarawakians, push aggressively for the decentralisation exercise which was started under the Pakatan Harapan government to be continued in order to ensure that our people would be entitled to quality healthcare without any more delay.