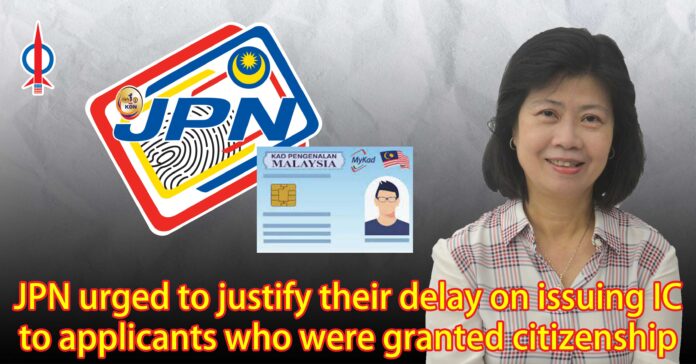 JPN should explain and justify their basis for the delay in issuing National Identity cards (IC) to applicants who have been successfully granted to Malaysian citizenship.

It has recently come to my attention that 2 of the cases which we have help to apply and obtain successful citizenship from KDN have still not been issued their national identity card by JPN.

The two applicants have received their letter of approval for their citizenship application from KDN in February 2020 and October 2020 respectively and had proceeded to the JPN Sibu to get their Certificate of Malaysia Citizenship soon after. Previously, successful applicants would only have to wait for 2-3 months for the national identity card to be processed and to be issued to them by the JPN. However, for these two cases, the applicants have been waiting until today and their identity card is still not issued to them yet.

However, in April 2022, the 2 nd applicant had received a letter from JPN Putrajaya which told him that his application for the national identity card would not be able to be processed unless and until he sends them “bukti keberadaan” in Malaysia such as school records and confirmation from community leaders.

This is not right as what JPN is demanding from these applicants are in fact, documents to support the applicants’ eligibility to be conferred the citizenship.

And all these documents had already been submitted to the KDN and who have approved their application based on them. Once the KDN has decided and approved the citizenship application, JPN has to follow the approval by issuing them the national identity cards.

Both the above cases were applications made under Article 15A of Federal Constitution, which means that the applications were granted under special circumstances to those under 21 years old. Hence, as long as the applicants have received their Certificate of Citizenship, JPN has no business delaying or refusing to issue their national identity card.

Furthermore, these applicants were legally adopted under our Sarawak Adoption Ordinance which means that our District office had already decided that they have Sarawak connection and are residing in Sarawak. By requiring the “bukti keberadaan” again, is JPN, as a federal agency questioning or ignoring the authority of not only the KDN and also of our state agency ie our District Office?

The latest case of the former border scout who was being denied ambulance transfer due to citizenship woe is a heart-breaking case of how the lack of citizenship may pose a threat to their lives.

There is no point for ministers and government heads to only successfully address every individual case which may come into the attention of the media.

There are in fact hundreds of cases where the applicants and individuals involved prefer to shun publicity on their private and personal plight as they prefer to maintain their anonymity. However, in an increasing number of cases, they are finding that they need to pay the price of adverse publicity if they should ever hope for the citizenship and identity card to be granted and issued to them.

Hence, for those who have already received their much awaited Certificate of Citizenship from KDN, JPN, as the last stop, should cut out all red tapes and bureaucracy and not delay or deny these people their national identity card, which is their most prized document to prove that they belong to this state and country.