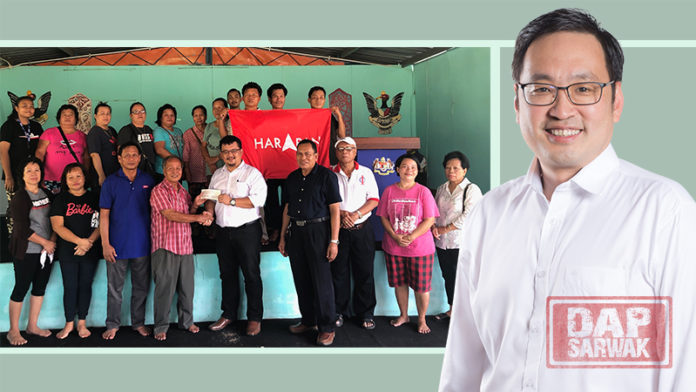 ‘As we are about to celebrate Gawai, we must also remember after more than 50 years under this State GPSBN leadership, some areas in Sri Aman are still inaccessible by road, namely the areas around Lingga to Banting.’

The current State Leadership has conveniently forgotten about connecting the folks from Banting to the main road network.

Isn’t it even more surprising when this irresponsible State Government is wasting a huge amount of money to build an RM1 Billion bridge across the mouth of the Batang Lupar river.

Shouldn’t it be cheaper to connect Sebuyau to Banting then Lingga then proceeding to Sri Aman and then build a cheaper bridge across the Batang Lupar and connecting to Betong Town, which from there on connect to Maludam. Wouldn’t it be less than a billion ringgit?

As a senior member of the State Cabinet, Datuk Amar Douglas Uggah should be ashamed that he has omitted the bridge project connecting Sri Aman & Betong Towns’ because by having a bridge connecting the towns, it will further enhance the future economic development of the two Divisions.

The economic benefits to the people from Banting to Betong will be greatly increased with such connectivity especially with the existence of Betong Airport rumoured to be built sometime soon.

A new State Government under Pakatan Harapan will definitely not ignore these areas left out from mainstream development.

Therefore, this GPSBN State Government should be replaced because it should have planned more holistically in its development of Sri Aman, Betong, and most interior Divisions, instead of concentrating nearly all of the State finances in the coastal areas.’

Leon Jimat Donald said this in his speech to Kampung Kejatau Residents during a meet the Rakyat session where he presented two cheques, RM4000 to TR Umbek from Kpg Kejatau & RM2500 TR Panggau Dato Awang Raweng from Skrang.