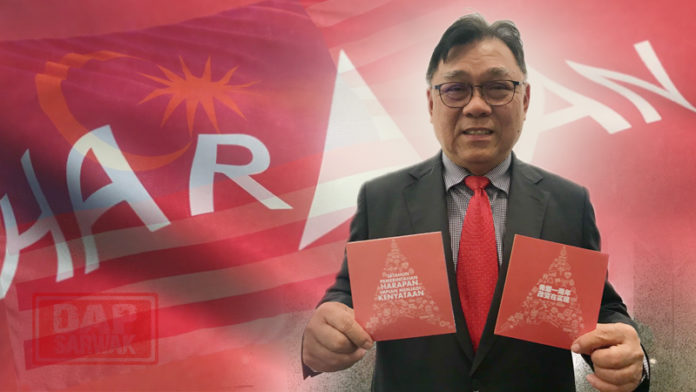 Media statement by Chiew Chin Sing State Assemeblyman for Tanjong Batu and Chairman of DAP Bintulu Branch on 8th May 2019,

He also said that according to the Federal MInister of Finance there are 550 projects totaling 41 billion yet to be executed in Sarawak. In the year 2019, Sarawak receieved 4.3 billion ringgit for development which is the second highest in the nation, second only to Sabah.

After one year of PH as the new government of Malaysia, the people are beginning to see the light of a brighter future and believe that the country’s future can only be better. Peoples of Sarawak see the positive changes that had been brought about by the change in government and also want  to change in Sarawak to ucher in a new Sarawak govenment to bring about greater change.

‘For in Sarawak, I see the light of change that PH will rule Sarawak after the next state election to implement better policies and together with Sabah and peninsular Malaysia march together towards a brighter New Malaysia.’

Chiew also pointed out that Prime MInister Tun Mahatir had insisted that he would continue on to fight corruption in the country. Fighting corruption is important for our country and for our future generation. It is only when we are able to get rid off the corruption and abuse of power left behind by the previous government that our country can be strong. We also need to  reduce the defiict efficiently.

To day one year later,  we are in a better and more stable financial position then we were before, but the devastation and problems which had been accumulating for the past 61 years surely cannot all  be solved in one year. As anytime when you try to bring about changes there will be resistance especially from those with vested personal interests.

The New Malaysia today  is  led by an experienced leader Tun Mahathir and with his group of new leaders the country is formulating policies that  benefits and bring unity to all in democratic Malaysia.

Today one thing that we can be sure of is that our country is better off than that of the former ruling party a year ago. Many positive measures and policies had been introduced to make our country better. And as the  government and the civil force operate better and better, improving our efficiency, the whole system will also improve.

Chiew pointed out that our national debt of 1870 billion which had been left behind by the  corrupt previous government, many are afraid that the debt will bring down our nation but the PH government is determined that we will not bring the debt to our next generation.