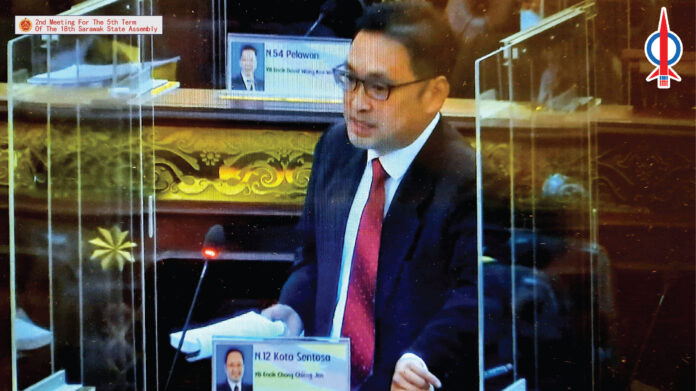 The Speaker has twisted and wrongly added the provision of the State Assembly Standing Order in rejecting my motion for the setting-up of a Special Select Committee to oversee and supervise the policies and management of PETROS with the purpose to ensure that the wealth from the Oil and Gas generated through PETROS will be fairly and equitably distributed to all Sarawakians.

My notice of motion was submitted to the office of the State Assembly on 2-11-2020 (Monday). The sitting of the current State Assembly starts today 9-11-2020. The Speaker rejected my motion on the ground of non-compliance of the 10-day notice stipulated under Standing Order 23(1).

Under S.O.23(1) provides no less than 10 days’ notice of any motion shall be given. It does not provide that the calculation of the days stops on the start of the sitting. The current sitting will continue for 5 days, namely from 9/11 to 13/11. The motion can be tabled in the House on any of these days. By 12/11 (Thursday), the notice would have complied with the 10-day requirement.

It is the job of the Speaker to interpret the Standing Order but not his job to add in words to twist the meaning of Standing Order to suit his purpose and shield the government from the supervision of the State Assembly.

The second ground on which his decision is flawed and wrong is that under S.O.23(2)(d), it provides that no notice is required for any motion “to proceed to any particular business out of the regular order”.

My motion is to move that:

Such motion is moved so that the meeting proceed to this particular business (to appoint the Special Select Committee) which is not the regular order of the meeting. Therefore, it is specifically provided under the Standing Order that no 10-day notice is required to be given.

The importance of my motion is to protect the oil and gas resources of Sarawak from being used to only benefit the cronies and the small elite groups friendly to the power that be.

The Sarawak Government has a track record of practising cronyism in the exploitation of natural resources, e.g. land, forest and timber resources. Despite billions of revenue generated from the exploitation of such resources, ordinary people of Sarawak remain poor, resulting in Sarawak having the 5th lowest disposable income households among
the 13 States and 3 territories in Malaysia.

The “Rich Government Poor People” trend must be stopped and one way to do it is fair and equitable distribution of wealth amongst the ordinary people of Sarawak.

The Speaker’s primary role is to facilitate the running of the State Assembly and the enhancement of the roles of the Assembly, one of which is its supervisory role over the administration of the Executive, the “check and balance” inherent in our democratic system.

His role is not to defend and protect that Executive from the scrutiny of the State Assembly. Therefore, I call upon him to allow the motion and I further call upon the State Government to install this “Special Select Committee” mechanism for the better protection of our oil and gas resources from being exploited to benefit a few at the
expense of the ordinary people of Sarawak.