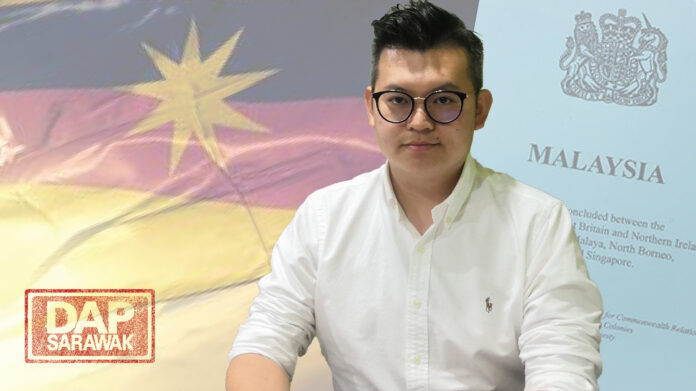 GPS and Parti Pesaka Bumiputra Bersatu (PBB) information chief Datuk Idris Buang should first “get rid of the log in their own eye; so that they can see well enough to remove the speck in other’s eye’ and take responsibility over the erosion and lost of our rights under MA63 all these years and well as allowing us to be left behind in terms of the development when they were part of the ruling Federal & State Government all those years.

Even though Pakatan Harapan was government for about 22 months, there were much effort done to restore the rights of Sabah & Sarawak that was eroded under the then Barisan Nasional Government which GPS was a part of.

First and foremost, in first year, a high-level Special Cabinet Committee for MA63 was formed consisting of the Chief Minister of both Sabah and Sarawak even though Sarawak at that time were part of the opposition in the federal level. On top of that, the Sabah and Sarawak State Attorney Generals, Chief Judge of the High Court of Sabah and Sarawak, state secretaries, professors, academicians, activist and many others are also included in the committees.

In this committee, out of 21 issues, 17 issues have been agreed upon and ready for implementation. That report was supposed to be tabled in Parliament to be debated and to be transparent to the people on our rights that affects us all. However, the Perikatan Nasional Government instead put that report under OSA.

Are they saying that our rights under MA63 is something that may be considered seditious or can create certain public disorder that it has to be placed under OSA?

Besides that, the first Constitutional Amendment tabled in Parliament under the Pakatan Harapan Government was to restore the original wordings of Article 1(2) of the Federal Constitution as of MA63 to restore our rightful and special status in the federation.

However, again this effort was rejected by GPS, UMNO & PAS even though the words used were exactly the same as that of MA63. This is against the spirit of the late Adenan Satem who spoke about the need to amend Article 1(2) and also clearly mentioned that we want nothing more, and nothing less, which is for it to be restored to the original wordings when the Malaysia Agreement of 1963 (MA63) was signed.

On top of that, we reviewed the Special Grants under Article 112(d) of the Federal Constitution, which was never reviewed since 1969 under the previous administration. The Pakatan Harapan government doubled the special grant to RM32 million for the year 2020 and will increase it further to RM64 million in the next five years.

On top of that, the PH government awarded another mega-project to Sarawak, the Trans-Borneo Highway or the Sarawak-Sabah Link Road (SSLR), connecting Sarawak and Sabah without going through Brunei which is estimated to cost RM 5.2 billion. This was acknowledged recently by the current Works Minister YB Fadhillah Yusof.

These are just few examples that we managed to do in less than 2 years. More could be done if given the full 5 years or even a longer time.

We were not a perfect government and there is definitely room for improvement in the budget. Much is needed to address the lack of development is due to mismanagement for the past 50-over years, but all that cannot be addressed merely in a few years.

But when PH is in power, Sabah & Sarawak did not lose any rights under MA63 unlike when GPS was part of the government where they gave away our rights to oil & gas, down-grade our special status and also passed the Territorial Sea Act 2012.

So instead of pushing the blame to PH, GPS should take responsibility of the loss of our rights all those years and not deflect the issue but answer the people of Sarawak why is there a need to delay the returning of our rights by forming another committee or council for MA63 when what they should do is to settle the remaining 4 items implement the 17 agreed under the MA63 Special Cabinet Committee formed under PH.

They also need to answer the people of Sarawak why GPS decided to form a backdoor government and bring back the corrupt UMNO and extreme PAS into Federal Government that will influence national policies that affects us all.