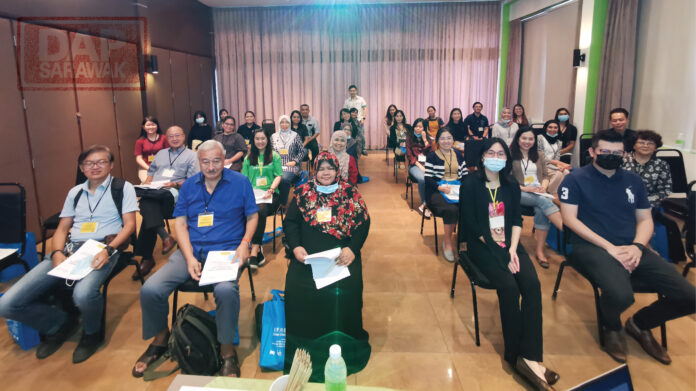 We invited a renowned Clinical Psychologist, Dr Ng Wai Sheng to train the methods to identify suicide tendencies and how to administer the needed support and therapy to about 50 participants from different background inclusing school counsellors, religious bodies counsellors, clinical psychologist, psychiatrist and community counsellors.

This is very important because these people are often in the first liners to deal with possible suicide cases in the community, and thus it is important they are equiped with right knowledge and methods to deal with those involved.

It is reported that suicide attempts has significantly increased during the MCO period. June was reported to be the busiest month with 21 officially reported cases around the country.

Health Ministry officially recorded 465 attempted suicides from January-June 2020, but many such cases goes unreported so we strongly believe there is much more cases.

One of the main focus is to deal with young people that may have suicidal tendencies and mental health conditions especially with the growing influence of social media & cyberbullying.

MOH’s 2019 National Health and Morbidity Survey (NHMS) that found that 2.3 per cent of the Malaysian population aged 16 years old and above experienced depression.

But the reality is that Malaysia only has 20 registered child psychiatrists in 2018, most of whom are based in Kuala Lumpur and Selangor.

Currently, there are also a lack of psychiatrist, clinical psychologist & counsellors to deal with this increasing cases.we only have about 410 registered psychiatrists in Malaysia with 204 working in the government setting.

As a whole, Malaysia only has a national average of 1.27 psychiatrists per 100,000 population. In contrast, the recommended standard ratio based on WHO and American Psychiatric Association, is one psychiatrist per 10,000 people which means we ideally should have at least another 3000 psychiatrists more in our whole country.

That is why my office organised such an important event to equip more people so that they can play their part as part of the whole mental health support ecosystem in our community.

We will continue to promote more mental health awareness programs in Kuching as it is important to allow people to seek the necessary help when needed and to prevent more suicides as every life is precious, especially our younger generations.