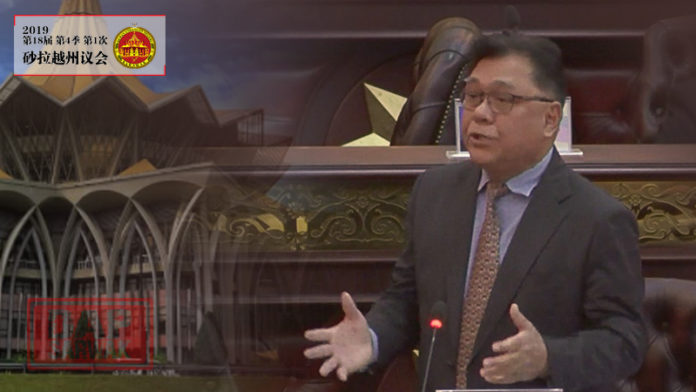 I am very disappointed that the Sarawak GPS had abstained from voting on the constitutional Amendment Bill which was tabled  in parliament on the 9th of April 2019.

As a result the Amendment Bill was defeated and the people of Sarawak denied again to the restoration of equal status when we Sabah, Sarawak and the Federation of Malaya joined to form Malaysia.

This is the one opportunity that we have to restore Sarawak to be in the same footing again as the federation of Malaya, after the 1976 Federal amendment by BN Sarawak which reduced Sarawak to become one of the 13 states of Malaysia. And that was the doing of you all the BN before you turn coats now to become GPS

I cannot understand  why the GPS MP still want us to be one of the 13 states and not a ‘one in three’ partner in Malaysia.

What is so disagreeable with that ? It is good for the people.  PH government in Sabah, Sarawak and Federation of Malaya supported, people in the whole of Malaysia even the Semenanjang folks supported except for those in PAS and UNMO.  So now GPS is with PAS and UMNO.  !! So  is that the agenda of GPS.

During the May 9 General election 2019, the PH had promised to restore equal partnership to Sarawak and Sabah with that of the federation of Malaya. A few months after that several committees had been  set up, and talk had begun  between all sides  pursuant to MA63.

As we are now still a state it is therefor only right that get our true  status back, that we are not a state but that we are one of the three parts hence the amendment on 9.4.2019.

Sarawak people had been waiting for the restoration to equal status since that day in 1976 when the BN government agreed to change it to a state !

Since then more bills were introduced in parliament and ate into our rights!

Sarawakian had suffered enough as a 13th state of Malaysia. Our territory is as big as penisular Malaysia , we have so much natural resources, how could we be equivalent to any state in semenanjung Malaysia.

Being a sate we have become one of the poorest state in Malaysia.

Just now I said the BN 1976 Amendment Bill has reduced Sarawak from a member partnership to a state ! That is why in the 2014 DAP Sarawak convention held  in the Bintulu, at the Dinner world restaurant, The Bintulu Declaration called “Towards Equal Partnership” was formulated at the convention and stated for the first time formally, by any political party, and called for equal partnership between Sabah, Sarawak and the federation of Malaysia. The drafter of the declaration is sitting on my right.

Since the Bintulu Declaration , Towards Equal Partnership, the BN government had not stop a day in trying  to wrestle  that call from us,  and sweet talk to the people of Sarawak. Now we know it is just hot air. Cos on the 9th of April 2019 when the opportunity came they abstained and forgo the chance that we are one of the three parts in Malaysia. They want us to remain as a state.

Sarawak people will remember clearly who the people are who had rather keep us to be a lousy poor state in Malaysia and voted against the restoration.

Today you want to move motion to restore equal partnership, saying this and that as if you care for so much, so great ! you could have done all you want before but no. Why?

That’s why be thankful to the PH government and believe in the new Malaysia we are building.