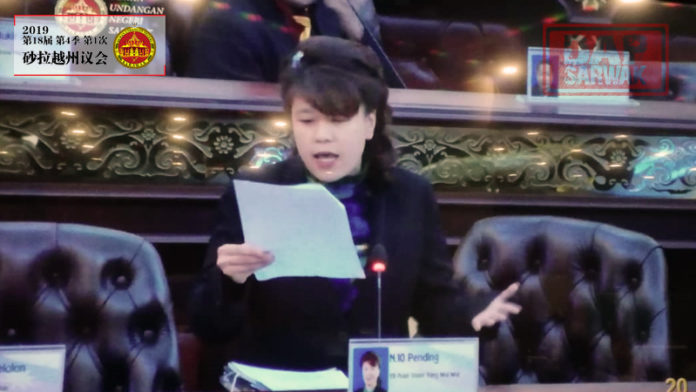 I have to say with great disappointment that Sarawak had missed the boat to restore Sarawak and Sabah as equal partners with Peninsula as stated in Malaysia Agreement 63 after the proposed amendment to Article 1(2) of the Federal Constitution was rejected on 9.4.2019 in Parliament.  When it comes to the crux of the moment of voting for the amendment of the bill, 19 GPS MPs plus 40 others MPs from UMNO and PAS abstained from voting, resulting the bill failed to get passed with 2/3 majority.Sarawak GPS had forgone the opportunity to correct the BIG wrong they had committed in 1976 for downgrading the status of Sarawak from one of the three territories to one of the thirteen states.

Let me refresh the memory of everyone sitting in this August House.  In 1976, 22 out of 24 Sarawak MPs from local based parties i.e. PBB, SUPP and SNAP supported the downgrading the status of Sarawak from one of the three territories to one of the 13 states. Who are they, let me read out their names in this August House.  8 from PBB, 7 from SUPP and 7 from SNAP so total there are 22 MPs during then that voted for the amendment without any sense of remorse.

I would like to call upon the rakyat in Sarawak to understand and see for themselves that it is the local based parties that had given out Sarawak equal status and downgrade it to one of the 13 states.  The rakyat in Sarawak should condemn the local based parties PBB and SUPP for the wrong they had committed in giving out our rightful status and rights as enshrined in MA 63.

And this time, on 9.4.2019, Sarawak BN/GPS which comprised of all local parties commit another wrong for working closely with UMNO and PAS to make sure the amendments of Article 1(2) did not get passed in Parliament.  It is obvious that, the aim of Sarawak GPS is not safeguarding and restoring the rights of Sarawak but all out to downgrade Sarawak and maintain Sarawak as 1 of the 13 states in Malaysia for the second time.One time in year 1976 and second time on 9.4.2019.  Sarawak GPS has openly gone against the wishes of the people in Sarawak.  And the people will not forgive what Sarawak local based parties GPS had done to the people and Sarawak as a whole.

The people are very upset and expressed their anger over GPS’s irresponsible action in not supporting the proposed amendment Bill.  The Sarawak GPS is full with hypocrisy, not sincere at all in safeguarding and restoring the rights of Sarawak.  All remain as empty talks, sabotaging from Sarawak GPS and what they do today by tabling this motion is just to cover up their blunder and full admission of their own guilt for going against the voices and will of the people in Sarawak.  Have Sarawak GPS ever thought about if the bill for amendment of article 1 (2) on 9.4.2019 in parliament had successfully passed on 9.4.2019, Sarawak isalready back to its rightful status as per MA 63 and today all of us here do not have to waste more time going through this bill??  The second reading of the amendment bill on Article 1 (2) follow verbatim as per the version in 1963.  That was the Original intention of our forefathers when Sarawak and Sabah join the Penisular to form Malaysia.  The proposed amendment was worded exactly as it was prior to the 1976 version as per demanded by Sarawak GPS.  And this also in line with our Tok Nan’s stand and wishes to take back all the rights belongs to Sarawak under MA 63 no more no less.So what is there to loose by supporting the amendment bill of Article 1 (2)?  Why creating all the fuss?

It is so shameful to note that even the famous speaker whom Sarawak BN/GPS, SUPP, PBB engaged to many of their Autonomy talks before all these years i.e.ZainnalAjamain had lambasted Sarawak GPS for not supporting the Amendment Article 1(2) despite him spending most of his time in Sarawak explaining issues concerning issues on Sarawak autonomy and MA 63.  Zainnal said he had spent more time talking about MA63 in Sarawak. “I thought they understand.  But it turns out, they don’t understand.  They just assume they do.  They are so rigid”.  He also said the Sarawak MPs’ decision to abstain from voting would not absolve them from committing the same offence the earlier Sarawak MPs in 1976 had committed in supporting the bill to change the wording of the Article 1 (2) to its current form.  So far I have not seen any rebuttal from Sarawak GPS relating to the comments made by ZainnalAjamain.  And thus we can come to conclusion that whatever said by Zainnal Ajamain against Sarawak GPS is true.  And I know the truth hurts.

May I enlighten this August House, when Sabah state assembly endorses amendment of Constitution to honour MA 63 on 18.4.2019, our Honourable Minister from Asajayacriticized openly that such passing is “a little too late” and should have done before the PH tabled the amendment bill in Parliament. And now, if we apply logic and argument, this motion that Sarawak GPS is tabling is way very very late and thus worse than the timing of Sabah’s bill and thus unnecessary.  Sarawak GPS’s minister has mouth to criticize others but not their own action.

We know very well that the second reading of the Federal Constitution Amendment Bill by our Prime Minister on 9.4.2019 was the moment that we had been waiting for the past 55 years because we could set back Sarawak and Sabah’s status to the correct footings. But Sarawak GPS for reasons best known to them, did not give full support to it to ensure the proposed amendment Bill obtained 2/3 majority for it to get passed.

On the other hand, Sarawak GPS comes out with 1001 reasons to justify their failure, alleging the content of the bill was not disclosed, never seen content of the bill, there was enough time to prepare, it was a trapped, why so hurry, Sarawakians can wait, need to add in the words “ Pursuant to Malaysia Agreement”, need to amend article 160 (2), even having our YAB Chief Minister blaming the innocent secretariat of the Ministry in Charge of Law to cover their guiltblablabla.  Everyday says one thing, Nancy say one thing, Wan Junaidi says one thing, Abdul Karim says one thing, YAB CM says one thing and there isn’t any common stand in their statements.  On 13.4.2019, we even read in the media that YAB Chief Minister acknowledging the sincerity of the Prime Minister in restoring Sarawak’s equal status.  What is this?  I would like to pose a question to YAB Chief Minister, given that you fully acknowledged the sincerity of the Prime Minister in restoring Sarawak’s equal status, then why you GPS MPs did not support the bill?   The people can see clearly GPS is trying to create all the confusion, because GPS cannot convince the people, so they confuse the people. I must say that It is because of the Sarawak GPS political ego and selfishness, the rights of Sarawak are being sacrificed.  Sarawak GPS put their political interest before the people’s interest.  GPS knows very well, if the amendment were to get passed in Parliament, Sarawak GPS can no longerable to use the autonomy issue as carrot sticks to fish for votes in the coming state election which is going to be held within a year or two.

I also wish to point out that through the episode happened on 9.4.2019 in Parliament, it is very obvious that Sarawak GPS is not PH Friendly at all.  All statements by Sarawak GPS claiming that they are PH Friendly are all lies, bohong because their actions on that very day had proven otherwise. The real BOSS of Sarawak GPS is still UMNO, PAS and NAJIB.

If Sarawak GPS continue to work with UMNO, PAS, Sarawak and Sabah will never get back our rightful status and rights that had been eroded over time during the BN era.  May I thus call upon Sarawak GPS to put Sarawak interest before their political interest, work together with PH Federal Government, because only PH Government is sincere in returning what are rightful and belong to Sabah and Sarawak.  In my view, amendment of Article 1 (2) must get passed first, restore Sabah and Sarawak to its original position when we join to form Malaysia in 1963, as the proverb rightly put it “A journey of a thousand miles begin with a single step.”.