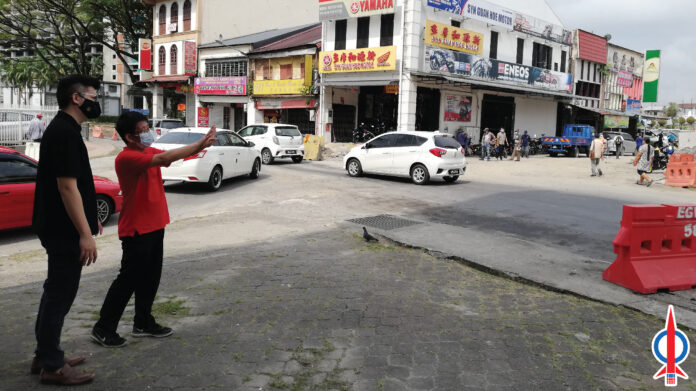 Together with Sdr Julian Tan Kok Ping and Sdr Anthony Chin(DAPSY KUCHING), we were on the ground to monitor the progress of the long-delayed drainage upgrades along Jln Masjid, Lebuh Java & Jln Market. We also took the opportunity to speak to the developer and contractor of the project to find out about the updates of the wholes construction and the expected finishing date.

Based on the explanation from the developer, they are currently in the last phase of construction and targeting so that most works especially on Jln Masjid and Jln Market to be done by March including the resurfacing of the road. The whole project is expected to be completed and safe for usage by end of April 2021.

End of last year, I had a dialogue with the Mayor of Dewan Bandaraya Kuching Utara (DBKU) and his officers to request his urgent intervention and to expedite the whole process for the convenience and also safety of the public including to better understand the problem that is being faced and more importantly the progress of the whole upgrades.

I was informed that DBKU will set up a task force to analyse all details of case including addressing any disputes and obstacles and to expedite the project. They have given their assurance that they are prioritising this project and will look into resolving the remaining outstanding issues.

There is an urgent need to expedite the long-delayed construction of the new drainage outlet for storm water discharge at Jalan Masjid, Jalan Market and Lebuh Java that cost about RM7 million which was first expected to be completed by January 2019.

The slow progress has caused so much inconvenience and also posed significant danger to the road users, and also business owners and those working in the vicinity.

Surrounding that areas, business owners and road users have feedback to us how the long-delayed construction has affected their business and livelihood.

On top of that, there is a government clinic in the area which is also constantly filled with members of the public that come to seek for medical attention. Such delays are not just affecting their livelihood but putting their lives and safety at risk.

So, due to the delay, that area still experience flash floods when it was supposed to solve the flash floods problem in Kuching itself.

That is why we hope the project can be completed as soon as possible for the good and safety of the people. We will continue to monitor as we do not want any unwanted accidents due to something that could have been prevented especially if it risks injury or even worst death to those affected.