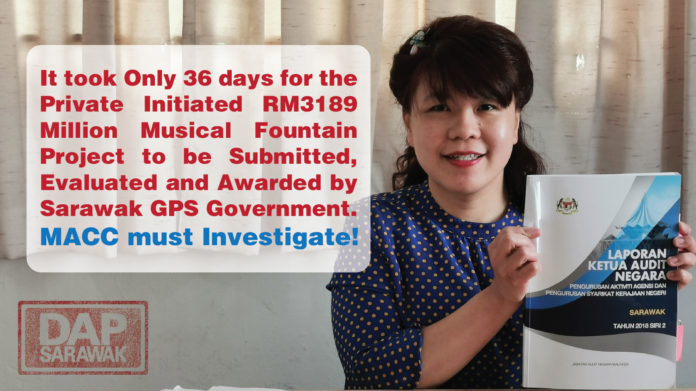 The issue I would like to raise today is regarding Musical Fountain.

In November, 2018 and May, 2019 Dun Sittings, I have raised issues respecting the Darul Hanal Musical Fountain, yet the Sarawak GPS Government refused to make full disclosure about the RM31 Million Musical Fountain Project.

However, thanks to the auditor general’s report 2nd series for year 2018, more information pertaining to the infamous Water front music fountain was revealed. My earlier suspicions that something is not right have more or less been confirmed.

Today, I would like to let the public know that the Musical Fountain was a project proposed by private company, Autopower Consultants (M) Sdn Bhd (511654-V). It was never budgeted for, and was whisked through in a high handed fast tracked manner. The actual contract sum is RM31.89 Million.

The project was proposed on 27th February 2018 (page 2-14). Approval was given one month later on Thursday, 29th March 2018. It takes only a total of 36 days for the project to be submitted, evaluated and awarded, which is a lot faster than any of us expected.

The general impression why such special treatment was given to Autopower for a design and built project is maybe because Autopower is a specialist in designing and building of waterscape or musical fountain. Unfortunately, this view is incorrect and far from the truth. According to AG report (page 2-15), the company has zero experience in building of musical fountain and waterscape. Equip with zero relevant track record, the design and built project costing RM31.89 million was then sub-contracted the project to two companies, namely Tradimas (Sarawak) Sdn Bhd and Jumsar (Sarawak) Sdn Bhd.

The question remains. Why has the State Government accepted the proposal from a company that has no prior experience in this job? The state government had not only accepted the proposal from an inexperienced company but allowed the job to be awarded based on design and built basis. It is common knowledge that contractor proposing any design and built project should be well versed in the type of project proposed. Yet, this is not the case for Autopower.

To rub salt on the wound, the contractor, Autopower, the 1st and 2nd interim payment received by Autopower is already equivalent to 44% of the total contract sum. Based on total contract value of RM31.89 million, a total of RM14.12 million was paid by DBKU to Autopower as its interim 1st and 2nd payments.

The most disappointing part is that although the contractor was given such special treatment and consideration for its proposal, the contractor did not adhere to the terms of the contract agreement. Autopower has failed to submit supervision report and monthly progress report certified by project consultant as required by the contract (page 2-33). When queried, DBKU claimed that the supervision report was the same as monthly progress report, but failed to address why DBKU accepts report that are not certified by consultant as required.

Why is DBKU being so lenient to Autopower when DBKU as Project Director should be guarding the Rakyat’s interests and money?

The salinity and salt content of Sg. Sarawak requires that the equipment used is anti-rust. The contractor has also installed equipment and parts (pipes, nozel spray, water screen generator, flange and etc) which claimed to be anti-rust but without manufacturer’s warranty nor confirmation that they are really ‘anti-rust’.

Within less than 4 months after hand over, a visit by Audit Department on 5th January 2019 revealed that parts of the fountain is already rusting (page 2-30).

Instead of replacing these rusty parts with new ones supported by manufacturer’s warranty, Autopower choose to paint the rusty equipment with anti-rust paint as remedy (page 2-31). The shocking part is DBKU as the Project Director, does not seem to mind being short-changed by the contractor and that the expensive fountains might get rusty again any moment.

What will happen to the fountain after the 2 year defect liability period by the contractor is over? Is the Rakyat going to foot the bill because DBKU has failed to follow the SOP? Are we going to pay for the hefty maintenance because DBKU has failed to be stringent in its contract management? Why has the government allowed such a rush job and proposal to be pushed through in such a hurry?

The AG report also stated many items that the contractor did, was not in accordance to as built drawings. I have to emphasize that the discrepancies in the building works was only discovered upon inspection conducted by AG Department in January 2019. How on earth can the contractor manage to get the certificate of practical completion (CPC) issued in October 2018?

Does it mean that if the AG Chamber did not conduct the inspection and ensure that rectification and remedial works are carried out, Autopower would have got off scott free?

This really calls into question of accountability and integrity. In this aspect, I call on the State Government to blacklist the contractor and consultants in the name of accountability. At the same time, I also call on MACC to conduct a thorough investigation because of the suspicious manner the project has been handled from the proposal stage to how the CPC was issued.