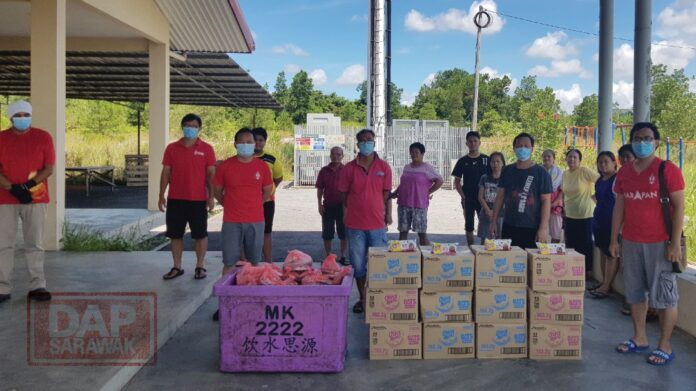 Since 30.04.2020, DAP Kuching and Stampin branch have been distributing food items to the general public especially to those within the B40 group. Amongst the places which DAP Stampin distributed the food items were Kampung Stampin, Kampung Stutong, Kampung Sungai Tapang, Stampin Resettlement Scheme and also to some of those in need who lived within the Stampin constituency.

A number of those who we met were general workers who get paid on a daily wage basis. Most if not all of these workers come from afar to earn a decent living in Kuching. Due to the announcement of the Movement Control Order (MCO), these people were unable to return to their respective hometowns and are left stranded in Kuching. To make matters worst, they are living off every cent of their savings while being unemployed for the last 49 days.

Now we are in the seventh (7th) week of the MCO and many have informed that the items which they have previously received food items from the Welfare Department or from DAP either have depleted or were on the verge of depletion.

On 03/05/2020, we received a text message from the Tuai Rumah of Kampung Stampin requesting for more food. Although we were also short of rice, sugar, flour and other staple goods, we managed to source fresh fishes from a kind samaritan. Coupled with 300 packets of biscuits, we immediately arranged delivery of the food items to the people of Kampung Stampin.

While DAP is trying its level best to help the people, our resources are limited without the assistance of the Federal and State Government. Even though the Federal Government has announced the Conditional Movement Control Order (CMCO), the Sarawak State Government together with eight (8) other states has decided against the enforcement of the CMCO at this juncture. This will mean that many continue to be affected by this MCO mentally and financially.

As such, we urge the government of the day to take cognisance of the plight and consider allocating more funds for the purposes of purchasing food items for those gravely affected by this MCO.