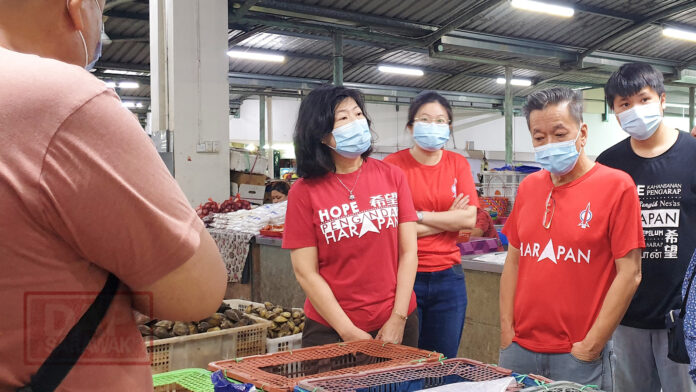 Sibu Municipal Council should act on the complaints received from some of the traders of Sibu Central Market regarding its security issue. The traders are concerned and frustrated that the wet market has lately been more constantly targeted by thieves who would strike during the nights to steal fresh produce and other goods left at the market. The most recent “break in” had involved 7 crates out of the 8 crates of live crabs, 1 crate of snails and 1 crate of clams which a particular trader had left at the market overnight. Because the crates were so heavy and cumbersome, the trader had no choice but to leave the crates at the stall for business on the next day. It was therefore a big shock when the crates were found to have been stolen when the trader opened for business on the next morning. A police report has been made by the trader concerned but there has been no update on any investigation being made yet.

With each “break in”, the traders could lose from hundreds to thousands of ringgit. And particularly during this time, when the economy has yet to fully recover from Covid 19, every cent lost would be very painfully felt by the traders. It is therefore understandable that despite all the relevant steps having been taken by the traders to lodge their complaints and to seek assistance from the authorities, the traders are aggrieved and exasperated that security has remained laxed at the market and the thefts have continued.

As the local government entrusted to look after the best interest and welfare of the people and should be in the forefront in interacting with the people,I call on SMC to empathize with the traders. Even though they are arguably not responsible in bearing the loss suffered by the people, they should understand the plight of the people when they are faced with losing their supplies. The security at the market should be reviewed to see if it can be improved to prevent further thefts. Even though there are closed circuit cameras installed at strategic places in the market and a few security guards stationed at a few specific entrances, it is obvious that these measures are not enough to deter the thieves. SMC should consider increasing the number of the security guards to be on duty at night or to install more cameras at more strategic places to monitor the whole area. They should perhaps also consider fencing up the whole market centre as a long term solution.

I also call on the police to send more police to patrol the vicinity at more regular intervals. They should also try to resolve the recent spate of thefts more aggressively by checking the closed circuit cameras installed at the market. Only when these thieves are caught would others be deterred and would the traders be able to earn their honest living with a peace of mind. I call on the authorities to hear and act on the grouses of the people for the sake of protecting the livelihood of the traders.