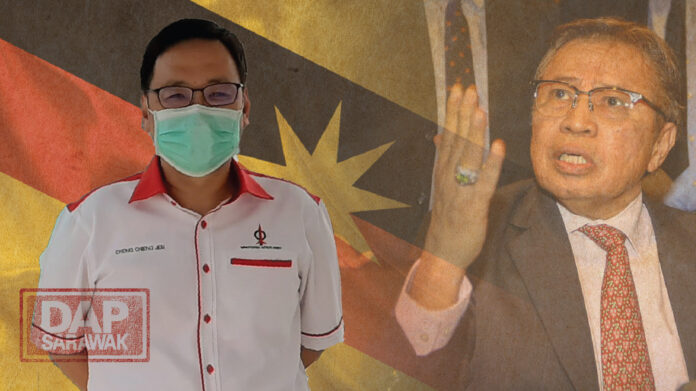 The focus of the government at this time should be to create jobs and to save jobs, instead of repeated announcements of the “hot air” projects.

I called upon Abang Jo to be more pragmatic on his economic planning for the state. He is the leader of the State and should adopt a more down to earth and effective approach in creating and saving jobs for Sarawakians in Sarawak.

I make this call in response to his announcement yesterday on the proposed autonomous rapid transit (ART) project which is estimated to costs RM6 billion.

Even as early as in 2017, the DAP Sarawak had proposed to the State Government to embark on the total revamp of the Kuching city, namely to acquire all the bus companies, provide 300 buses operating on the roads and free bus rides for the people for the first 5 years of its implementation.

Such proposal would cost the Government an estimated RM50 million a year to operate while creating at least 1000 middle-range paying jobs and saving commuters few hundreds in monthly expenditure on petrol, parking, car maintenance and even hire-purchase repayment (as there would be less need to buy cars).

Instead of adopting the proposal, Abang Jo first proposed the Light Transit Rail (LRT) which was estimated to cost RM10 billion, then changed to the hydrogen bus project and now the latest ART system. After much initial excitement on the part of the Sarawak State Government over the proposals, he first two proposals simply fizzled out. This third project will likely suffer the same fate as it is not practical to start with in the first place and the actual benefits does not justify the costs involved.

Though the State Government, for much of its face-saving attitude, has lost 3 precious years in the implementation of the free bus service proposed by DAP Sarawak, it is still not too late to start. In fact, as early as 2014, the then Land Public Transport Commission (SPAD) had announced a study of public bus routes and system in Kuching but such plan was not put to action.

Therefore, the DAP Sarawak’s proposal for free public bus system can be immediately implemented and will be in full operation as early as the beginning of 2021. This will create jobs for bus drivers, mechanics, system programmers, system support staff, and other economic spin-offs in our local economy. It will also save the commuters monthly expenditures on petrol and transport, thereby increasing their household disposable incomes.

We call upon the State Government to immediately implement the proposed the free and efficient public bus system and not embark on something that seems grand and distance and with costs far out-weighing its benefits.

The State Government is entrusted by the people of Sarawak to properly manage the people’s money. It has to spend prudently and give Sarawakians every Ringgit worth of benefit for every Ringgit spent.